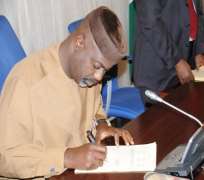 The government of Cross River State condemns in very strong terms the deplorable and tragic incidents which occurred on Saturday the 23rd of October 2010 in Boki Local Government Area between Nsadop and Boje communities, over land rights. The present and past State government administrations had waded into the land dispute between these communities by demarcating clear boundaries in the disputed area to forestall further trespass by both communities in an attempt to reach a resolution. However, the scale of destruction of farm crops and property as well as the needless loss of lives in Nsadop was a shocking escalation of the dispute at hand and totally unacceptable. This administration, up to the last moments, had actively intervened by inviting the leaders of the warring communities to amicably resolve the dispute and prevent this crisis from unfolding. Despite these and many other attempts, the communities still resorted to violence. What is most disturbing is the potential for this brewing conflict to spread to the neighboring communities. It is in the light of this potential threat to the peace and stability of the region and in keeping with its constitutional responsibility that His Excellency the Governor has directed the following immediate actions: i. The confiscation of the disputed land lying between Boje and Nsadop. The Surveyor-General of the state has been directed to delineate the area in question. ii. The imposition of an indefinite dusk to dawn curfew between 6.00 p.m. to 6.00 a.m. in Boje, Nsadop and adjoining communities of Bansan and Iso Bendeghe, with immediate effect. iii. The setting up of a Judicial Panel of Inquiry with a view to determining the remote and immediate causes of the conflict. iv. Directed the State Emergency Management Agency (SEMA) to move into the area to carry out a situation assessment and provide relief to the victims. This administration wishes to assure all Cross Riverians that the culprits of this crisis will be apprehended and made to face the full weight of the law. We wish to use this opportunity to categorically warn against further breakdown of law and order within the state regardless of reason or motive. We also will not hesitate to pursue and bring to book individuals who instigate and incite such violence for their own personal and selfish reasons. Be rest assured that perpetrators will be prosecuted and this Government will not relent in its obligation to ensure peace and stability as well as maintain the integrity of Cross Rivers State as the safest and most peaceful state in Nigeria. Patrick Ugbe, Chief Press Secretary/Special Assistant, Media to the Governor.