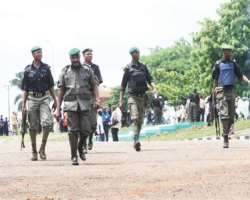 
ABUJA, Oct 11, (THEWILL) - Amnesty International and Socio-Economic Rights and Accountability Project (SERAP) today asked President Goodluck Jonathan and the Rivers State Governor Mr Rotimi Amaechi to "urgently set up an independent commission of inquiry to investigate the excessive use of force and firearms by security forces that resulted in at least one death, and 12 serious injuries at Bundu waterfront, Port Harcourt, last year.

At a joint press conference held in Lagos to launch the report tagged: Port Harcourt Demolitions: Excessive Use of Force Against Demonstrators, and to brief journalists on the planned litigation before the ECOWAS Court of Justice Abuja on the matter, the groups demanded an end to "almost absolute impunity for the excessive use of force which took place on 12 October 2009."

The 18-page report offers eyewitness reports from the victims of the Bundu shootings as well as from women who were intimidated and beaten by security personnel.

"The excessive use of force seen in the Bundu shooting is just one of many examples of the brutality with which the police and army operate throughout Nigeria," said Lucy Freeman, Amnesty International’s Nigeria researcher, at the press conference. "Yet, few officers are held accountable. In most cases there is no investigation. There must be an end to the impunity enjoyed by Nigeria’s security forces.

"The soldiers started shooting again but this time, they fired shots into the crowd. I was shot on my left thigh," recalls 34-year old Tamuno Tonye Ama. "We tried to run away but there was nowhere to go. Soldiers kept firing and…charged towards the crowd and people were now running all over the place.

"We consider the events of 12 0ctober 2009 to constitute violation of the human rights of the victims to protest, demonstrate and take part in political activities. We also consider the excessive use of force to be unlawful, resulting in violation of the right to life," added Adetokunbo Mumuni, SERAP Executive Director.

Mumuni also said that, "We consider the actions by the agents of the federal government and the Rivers state government to violate the right to health; right to adequate housing; right to privacy; right to freedom of movement and freedom to choose residence; and right to property, guaranteed by the African Charter on Human and Peoples’ Rights; the Universal Declaration of Human Rights; the International Covenant on Civil and Political Rights; and the International Economic, Social and Cultural Rights.

"Impunity arises and thrives when there is a lack of accountability by government for violation of human rights such as the incidents in Bundu waterfront. Eliminating impunity requires increased accountability and total compliance with Nigeria’s international human rights obligations and commitments if the country is to reclaim its lost glory in the comity of civilized nations. A widespread culture of impunity under which government’s abuse of powers are neither investigated, exposed, prosecuted nor sanctioned will continue to leave victims without effective remedies," Mumuni also said.

"Therefore, SERAP is determined to ensure justice in this matter, and to challenge the impunity for the violation of the human rights of the victims, and ensure that the victims obtain an effective remedy. In this regard, SERAP has finalized the necessary court paper to be filed before the ECOWAS Court of Justice in Abuja this week, seeking justice and remedies for victims of the excessive use of force in Bundu. Mr Femi Falana is the solicitor that would handle the case for SERAP and the victims.

"Among others, we would be seeking an order of injunction against the Federal government and the Rivers State government stopping them from implementing any planned enumeration in Bundu that does not conform with Nigeria’s international human rights obligations and commitments."

The demolition and preparation for demolition of Port Harcourt’s waterfront settlements has been accompanied by an excessive use of force by Nigeria’s security forces. "Security forces must never be deployed to assist in carrying out illegal evictions. And there must be an urgent review of the deployment of heavily armed security forces to assist the administrative authorities in carrying out demolitions, evictions, enumerations and valuations when the result is the excessive and bloody use of force that was witnessed in Bundu.

"Despite clear evidence that the security forces opened fire, shot and injured several people on 12 October, the governor of Rivers State told Amnesty International that "there was no firing, no shooting and no-one was killed or injured on the day. In fact, nothing happened at all. The issue of impunity is one that is all too entrenched in Nigeria," said Lucy Freeman adding that government cannot keep turning a blind eye to human rights violations by its security forces.