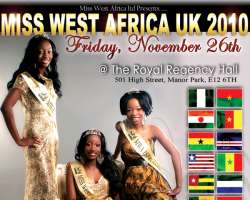 The Miss West Africa beauty pageant started off as a fascinating beauty pageant with great contestants all of whom were originally from West Africa, competing for the title spot as Miss West Africa in the attempt to transcend national barriers in their presentation. With the first ever queen being Amina Kamara in 2008 and the second and current being Shireen Benjamin in 2009 (currently nominated for a BEFFTA Award) people all over the world are excited to find out who will follow Shireen Benjamin's footsteps in goodwill ambassador work, and more so, which country would she originate from. But if that wasn't enough, just wait to discover the international growth the organizers are taking the West African brand.

The Miss West Africa brand and franchise was ignited by Nana Tamakloe in 2007 after working with his colleague Pauline Long in her work to build Mr and Miss East Africa UK. Ever since the first event, the brand grew rapidly and now has become an international entity bringing a new light, professionalism and a breath of fresh air to fans of African beauty pageants around the world. Nana Tamakloe is working with some of the best organises around the world and still franchising the Miss West Africa name. “What I intend to do with Miss West Africa is to keep everything organised, professional, important and most of all entertaining! Many people assume we have major sponsors but the truth is all it takes is great efforts, respect for your brand, and hard working colleagues and you can be aligned with the best. I am taking Miss West Africa to the likes of Miss World, Miss Universe with the objective of letting people know about issues in the West, the beautiful women, and the amazing culture and most of all, making West Africans proud”- Nana Tamakloe.