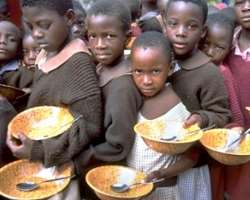 Since antiquity the problem of poverty has engaged the consciences of statesmen and thinkers, but few have dared to draw the obvious context – and fuel – for it: inequality. In the happier days of the Roman Empire almost 2000 years ago the estimable Trajan, one of the great Caesars, introduced the Alimenta, which was an ambitious welfare program to help the poor, especially orphans and destitute children, throughout the Italian part of the Empire. Food and education were subsidized. This was the earliest record of a welfare program on such a scale, and it won wide plaudits for Trajan. The great English historian of Rome, Edward Gibbon, surveying this era and particularly admiring of Trajan, wrote that if someone were to "fix the period in the history of the world, during which the condition of the human race was most happy and prosperous, he would, without hesitation" name the 80 years of the Roman era which included, and was rather dominated, by Trajan’s rule. This was the period of the great Roman peace.

Tellingly, the fact that slavery was widespread in Rome did not attenuate that glorious picture for Gibbon, writing over 250 years ago. None of the great religious leaders, Jesus Christ and Prophet Mohamed, ever considered for one moment that poverty and equality would forever be abolished. Christ, otherwise such a luminous moral authority, in fact is quoted as saying that the poor "shall always be with us." And the Prophet Mohamed, who is justly credited for institutionalising charity for the poor and the needy, left slavery intact, though he clearly was in a position to have abolished it in his domain, which was vast, and increasing (it should be noted that he, however, freed some of his own slaves and called for better treatment of slaves, surely an endorsement, rather than a repudiation, of the system). Indeed, the emphasis on a better and eternal after-life which these transcendental religions preached suggested that temporary worldly hardships – poverty, oppression, persecution – ought to be endured in good humour, if not embraced.

These reflections point to two important considerations that must be stated at the outset. The first is that it is futile to look for inspiration to combat poverty and inequality from anywhere other than secular institutions of the modern state. The second is that combating poverty and inequality should be seen as an integral part of the universal struggle for human rights – a very important result of the most important political event in the history of the modern world: the French Revolution, with its emphasis on liberty, equality, and fraternity.

Combating Poverty and Inequality: Structural Change, Social Policy and Politics, a new report by the Geneva-based United Nations Research Institute for Social Development, makes these points in another way: in about 350 pages, its authors argue with great cogency and detail, that most previous efforts at tackling global poverty – the framework provided by Poverty Reduction Strategy Papers (PRSPs), the so-called pro-poor targeted programmes, and the Millennium Development Goals, not to mention the many ill-conceived development assistance programmes and aid commissions on Africa – have failed largely because many have de-emphasised the active interventionist role of the state in pursuing policies of equality and other social programmes that can only be successfully pursued by the state. The notion of ‘trickle down effects’, integral to the so-called Washington consensus, had really no chance of making a dent in global poverty partly because it didn’t even think that inequality is a problem in itself.

The lead author of this report is Yusuf Bangura, a leading African scholar whose previous engagement with the political and economic meltdown in Nigeria and Sierra Leone thoroughly prepares him for broader sweeps across the world’s vast poor regions.

The report posits that the recent food crises and the fiscal problems in several rich countries have "called into question the possibility of achieving the Millennium Development Goals of halving poverty and hunger by 2015" though some parts of the globe – in particular Asia (led by China) – experienced rather sharp falls in poverty. In sub-Saharan Africa, little progress has been made. Overall, there are still one billion people mired in extreme poverty globally.

The report blames this failure not on the food crisis, which is largely transient, but on the prevalent approach to tackling global poverty "which often ignores its root causes, and consequently do not follow through the causal sequence." In countries that have successfully reduced poverty – which the report describes as "increasing the well-being of the majority of their population" – "long term processes of structural transformation, not poverty reduction per se, were central to public policy objectives."

This is the report’s original – and important – contribution to the debate on poverty: the idea that the state must play an active role in fashioning social policies that would reduce inequality, create employment opportunities, and remove inherent disabilities, like discriminatory cultural practices that, for example, limits educational opportunities for women. The report emphasises three key approaches: the creation of jobs that are adequately remunerated and accessible to all, regardless of income or class status, gender, ethnicity or location; the fashioning of comprehensive social policies that are grounded in universal rights and that are supportive of structural change, social cohesion and democratic politics; and the protection of civic rights, activism and political arrangements that ensure states are responsive to the needs of citizens and the poor have influence in how policies are made.

All of this may sound uncontroversial and eminently sensible, but in fact the report’s key anchor – the advocacy of an activist role by the state in directing economic and structural social changes – goes against certain orthodoxies. The report, in other words, is bound to have powerful enemies. This will be a shame, for at least two reasons.

First, the report is thoroughly grounded in empirical research: it is drawn from several dozen case studies, and, as far as this writer can see, the authors make no ideological affectation. It is always harmful to substitute doctrine, however well intentioned, for knowledge. Dickens, for admittedly unedifying reasons, seems to have gotten it about right in A Christmas Carol (1843), when he has the ghost of Christmas Present show the miserly Scrooge two very desperate children with the immortal words: "This boy is Ignorance. This girl is Want. Beware them both, and all of their degree, but most of all beware this boy, for on his brow I see that written which is Doom, unless the writing be erased." The ignorance of the powerful can compound want, leading to doom for the poor and weak.

Second, nothing in the report suggests that the authors are in a fighting mood: in fact, the diffidence is striking. There are echoes less of Marx than of Keynes, who at the height of the Great Depression in 1930 wrote in the Economic Possibilities for Our Grandchildren that with the spectacular advance in science and technology, there was bound to be enough economic growth to end the perennial problem of not having enough to eat and to meet other basic needs, not in his lifetime but in the lifetime of "our grandchildren" (in Europe.) And of Jeffrey Sachs, who has written, in The End of Poverty (2005), that "the wealth of the rich, the power of today’s vast storehouses of knowledge, and the declining fraction of the world that needs help to escape from poverty all make the end of poverty a realistic possibility by the year 2025," that is, in our lifetime. Sach’s notes in particular poverty in Africa, emphasizing that talk of structural adjustment or austerity in spending simply won’t do. Echoing the Tony Blair’s Africa Commission, Sach’s writes that much needed above all is greater investments in basic infrastructure, in transportation, in education, in health, an opening up of markets in the West, and more favourable trade policies towards the continent.

Despite its bulk – perhaps because of it – the report has a few catchy mantras which best summarise its key points, so let’s list them down by way of conclusion: "Employment represents a crucial channel through which income derived from growth can be widely shared;" "Social Policy, at its best, is transformative, and cannot be separated from efforts to create employment-centered growth and structural change"; "Poverty and inequality must be considered as interconnected parts of the same problem"; "Countries that have successfully reduced poverty had purposeful, growth-oriented and welfare-enhancing political systems; they also built and maintained competent bureaucracies"; "the protection of civic rights, and political parties that effectively engage the poor are all important for poverty reduction"; and "most countries that have been successful in exploiting the benefits of globalization have adopted heterodox policies that reflected their national conditions, rather than fully embracing market conforming prescriptions."

The last point is bound raise the most heckles in some quarters, but it is perhaps profoundly the most important.