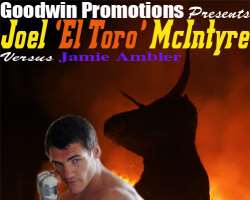 Speaking from his Portsmouth home Oakey, who retired in May this year, said, ôJoel McIntyreÆs a little protΘgΘ of mine. A little while ago I was asked to have a look at this local lad. IÆd already heard stories about him as heÆs from the same little neighbourhood as myself and he fought for the same amateur club I did.

I get asked to look at lads regularly to see if they if they have what it takes to move from the amateurs to the pros. People donÆt realise there is such a difference between the professional boxing and amateur boxing, theyÆre two completely different games.

Anyway, I liked what I saw so arranged for Joel to go and trial with Johnny Eames, at the Ultrachem TKO Gym in London, as I wanted to get him the best trainer and training possible.

After a couple of weeks in London I asked Johnny if it was all right with him if we did a couple of rounds. I didnÆt want to mess with what Johnny was doing, you know, but wanted to have a move around with him. I wanted to really see what he had to offer.

I didnÆt go too hard on him, just enough to see how good he was. I really liked what I saw, thereÆs a lot to like about him. HeÆs got all the tools there and just needs to be taught how to use them properly, whichÆll be no problem for Johnny and Del (Derek Grainger), theyÆre the best in the business.

I think Joel has the potential to go all the way in boxing. HeÆs strong, heÆs aggressive and heÆs also got a lot of boxing ability. I look at Joel and I see a lot of myself, he was a bit of a tearaway kid. I hope that boxing will steer him in the right direction the same way as it did me, you know, which is a good thing.

I think heÆll surprise a few people, heÆs the type of fighter who youÆll be able to take a chance with after a few fights.

He looks up to me and I try and help him as much as possible back here. When heÆs not in London I help him train here in Portsmouth. IÆm trying look after him the best I can as I think he has a bright future in boxing and IÆll be there in London cheering him on September 11th.ö

Joel æEl ToroÆ McIntyre versus Jamie Ambler is on the undercard of the Goodwin Promotions æItÆs PersonalÆ event at York Hall, Bethnal Green, London on Saturday the 11th September 2010.

Marston, who is now trained in the UK by Derek Grainger at the æfight factoryÆ known as the Ultrachem TKO Gym in Canning Town, will be facing a stern test in the highly experienced Welsh battler Lana Cooper in a four round Featherweight contest.

Welterweight John Wayne Hibbert, who also has a perfect unbeaten record, is set to face his sternest test to date when he faces the experienced brawler Kevin McAuley from Halesowen.

Unbeaten prospect Tony "The Conqueror" Conquest is set to face one of the most experienced CruserweightÆs around, Hastings Rasani, who has fought the best the division has offered over the years, David æHayemakerÆ Haye, Troy Ross, Bruce æLionheartÆ Scott, Terry Dunston, Mark Krence, Tony Bellew, Dean Francis... and the list just goes on. This is no easy fight for Conquest, who will need to be right on his game.