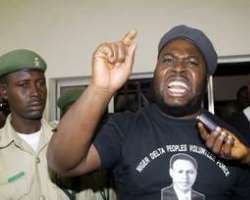 Dokubo Asari
LEADER of the Niger Delta Peoples Volunteer Force (NDPVF), Alhaji Mujahid Dokubo-Asari, Apostle Kalada M. Jene, the Vicar of Great Commonwealth of the Niger Delta, and nine others have formed a group to agitate for the ethnic nationalities of the Lower Niger.

The group, Lower Niger Congress (LNC) which has Fred Agbeyegbe, President of Itsekiri Peoples Congress as its Chairman rose from a meeting in Warri, the commercial nerve centre of Delta State, with some tough resolutions.

For them, the story of the emergence of Nigeria as a creation of the British Colonial enterprise is too well-known to bear much repetition; suffice it to say that by a combination of guile and brute force, dubious Protection Treaties were signed by our forebearers with the British Crown between the 18th and 19th Century, as the British at that time sought to secure exclusive relationships with the peoples of the region at the height of the European scramble for Africa.

''The amalgamation of the Colony of Lagos with the Northern and Southern Protectorates in 1914 and the eventual christening of the newly founded territory of Nigeria were done without the consent of the peoples of Niger Delta and Igboland'', they said.

''It is important to note however that none of the treaties of protection extinguished the sovereignty of the protectorates neither did the people of these protectorates relinguish their sovereignties. As a result, they expected that the end of British “protection” would mean a return to their pre protectorate independent status.

''That was not to be as they were later to discover that the British protectorate system had extinguished their independence and felt betrayed to find that their sovereignty had been transferred to the Nigerian State, the successor to Britain.

''With this illegal and illegitimate transfer of sovereignty, the peoples of the Niger Delta and Igboland lost their jurisdiction over their territories, their natural resources and citical elements of their political and economic administration''.

According to the promoters of LNC, ''the concept of extinguished sovereignty as used above is deliberately framed to provoke an indepth analytical discussion of the rise of the Niger Delta and Igbo peoples as well as those of other Nigerian nationalities covered by the British protectorate treaties''.

They then posed the following questions:
* Under what circumstances can the sovereignty of a people be said to be extinguished?. Have the people ceased to exist? Are they extinct? Did they volunatrily extinguish their sovereignty? Our position is that the sovereignty of the nationalities are intact, only suppresed by the sinister conspiratorial forces of the Nigerian State and its foreign collaborators.

* By demanding the restoration of the rights of indigenous peoples to their lands and natural resources, the Kiama Declaration was arguing for non-extinguishable sovereitnty of the peoples of the Niger Delta. The Igbo had earlier been through a brutal civil war in circumstances that revolved around the question of an appropriate constitutional arrangement for the Nigerian Union.

The manipulations, distortions and marginalisation first introduced by British Ordinances, later reinforced by Military Decrees have now been made permanent by Decree No. 24 of 1999 (styled the 1999 Constitution) foisted on us by one General Abdusalami Abubakar.

They said the challenge before the ''entrapped nationalities of the Lower Niger is how to reverse their slave status in their own God given homelands under a dubious “1999 Constitution” and that is the task the Lower Niger Congress has taken up in this initiative. We are in support of the Suits in various Courts challenging the legitimacy of the so-called 1999 Constitution and seeking a negotiated constitutional order through a peaceful process''.

Adding, they said ''the 1999 constitution entrenches mediocrity, corruption and gross inefficiency which have together broughtNigeria to a failed enterprise with the Americans assuring us that the Union would break up violently in less than four years from now. Muamar Ghadafi seeing the same jarring cracks in the Nigerian house also advice a peaceful dissolution forthwith.

''It is therefore a great pity that at a time these discussions are going on in the international circuit concerning Nigeria; at a time we have at home armed movements for emancipation, actualisation, restoration of sovereignty, Boko Haram and Jos raging all over Nigeria, politicians are pursuing hollow constitutional amendments and shouting themselves hoarse over whose time it is to preside over the Nigerian rot in the name of elections.

''Our position is that, elections, even if free and fair will not address the fundamental questions facing Nigeria at this time, especially as exposed in the on-going angry debate over zoning which finally lays bare the falsehood of “One Nigeria”. Accordingly, we warn that should the proprietors of Nigeria prefer to proceed heedlessly into another election without first resolving the questions of the terms of the Nigerian Union, we will not hesitate to mobilise the masses of the Lower Niger to reject the election and its products and thereafter the 1999 Constitution itself.

''We would also like to correct the erroneous impression being peddled around in certain quarters that the emergence of Dr Goodluck Ebele Azikiwe Jonathan as President of the Nigerian State will not deter groups such as ours from agitating for the restoration of the sovereignty of the various component groups within our Alliance.

They resolved at the Warri meeting to:
* Pursue the restoration of the hijacked individual sovereignties of the nationalities of the Lower Niger

* Federate the sovereignties into one geo-political entity in pursuance of a better future for the peoples within the Alliance.

* Approach the fiftieth anniversary of the hoax called Nigeria, in place of elections that only excercabate the situation, we demand that the proprietors of the Nigerian State should immediately convene a Sovereign Meeting of all Ethnic Nationalities of Nigeria before the 1st October, 2010 to negotiate, for the first time, the re-working of the constitutional arrangement for the distressed Nigerian Union; failing which, we shall take steps to reverse our slave status in our own God given homelands in exercise of our right to self determination as enunciated in the United Nations Declaration of the Right of Indigenous PeopleS.