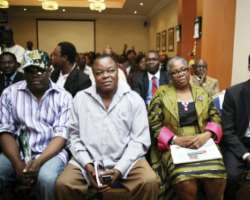 Following the approval, earlier this year, of the Copyright Society of Nigeria (COSON) by the Fedreal Government as the Collective Management Organisation (CMO) for musical works and sound recordings, the organisation held a Stakeholders' Forum at the Protea Hotel, Ikeja, Lagos on July 1.

A short documentary narrated by musician Sunny Neji, was screened to the gathering, to communicate the social, legal, business, constitutional and international foundation for the emergence of COSON. In Neji's words, "With the approval of COSON as a sole CMO and the establishment of a solid management for the organisation, the old excuse, 'we don't know who to pay to', is now dead and buried. COSON is here to make sure that never again will Nigerian creative talents labour in vain."

COSON chair, Tony Okoroji, took the podium after the documentary. In his speech, he communicated his appreciation for the immense support COSON has received, and its readiness to make a positive change in the industry. "Never in the history of Nigeria has this calibre of people come together to discuss these issues in one room," he declared. "The era of free music is gone. By the approval of COSON as a sole CMO, the Federal Government of Nigeria has given us the marching orders to end the abuse of creativity in Nigeria. We are determined to give meaning to the COSON slogan - Let the music pay."

The new management team of COSON, led by Acting General Manager, Chinedu Chukwuji, was also introduced to the attendees at the forum. The Director General of the Nigerian Copyright Commission, Adebambo Adewopo, was represented by Charles Amudipe, who assured delegates of the "full support" of the NCC on behalf of the Federal Government.

The gains of the Stakeholders Forum was quickly followed up with an introductory course on Copyright and Collective Management, held on July 7 and 8 at the same venue, the Protea Hotel, Ikeja. The course was held under the auspices of the NCC, which provided trainers for the sessions. Originally intended for operatives of COSON only, the two-day training was extended to include copyright owners (musicians) who are members of the organization; users of musical works; and the media. Welcoming all to the programme, Tony Okoroji explained that the widening of the training was due to the fact that "there are several elements that must come together for the success of the reformed copyright collective management regime in Nigeria."

Representing the Director General of the NCC was Bayo Aiyegbusi, who assured participants that the government agency "will provide the institutional support that COSON will need." He noted that developments on copyright and collective management in Nigerian are in line with developments in the rest of the world. Speaking further, Mr Aiyegbusi disclosed that two international agencies will visit Nigeria in the coming days, to assist COSON in ensuring that musicians get due return for the use of their works. The visiting organizations are: the World Intellectual Property Organisation (WIPO) and the Paris-based International Confederation of Societies of Authors and Composers (CISAC). "The music must pay," said Aiyegbusi.

Among the papers delivered at the training were: 'Introduction to Copyright Law and Administration in Nigeria' by John O. Asein, Director of the Nigerian Copyright Institute; and 'An Overview of the Provisions and Imperatives of the Collective Management Organisation Regulations' by Mike O. Akpan of the NCC.

Speaking during one session, Kenny Saint Brown thanked Tony Okoroji for "pulling me in" for active involvement in COSON. She revealed that, like 95 percent of her fellow musicians, she had been resistant to joining any organisation, even PMAN. But now, "I want to contribute hundred percent to the growth of COSON," pledged Saint Brown, who said she had never received a kobo in royalties in all her 12 years as a singer. Now rebranded as KSB, the singer urged for a youth-driven approach that would make COSON and its objectives appealing to Hip-Hoppers who dominate the music industry. "Artists, we don't respond to things like this (training), it's too serious. Artists like jamborees."

Nomoreloss concurred, saying, "Intellectual property owners are young people. They are the ones keeping the music industry alive today and - to use their language - 'Dem no send'. They don't know [COSON]." Efforts must be made to bring younger musicians on board, he said, adding that the NCC should be seen to endorse every major campaign by COSON because "Nigerians respect the law when it is government law."

Responding to KSB and Nomoreloss, Tony Okoroji reeled out the names of a diverse range of musicians including Ruggedman, Muma Gee, Stella Monye and Adewale Ayuba - all of whom are COSON members. To support its application for approval, the organisation had supplied the details of over 1000 members, well above the government requirement of 100. "The problem of COSON is not membership," Okoroji stated; the problem is that most of the members don't speak about their involvement in the CMO. "Encourage them to speak, because it is about their rights. "Among media representatives at the training were Africa Independent Television (AIT) and newspaper editors from The Guardian, The Daily Independent and NEXT. Participants were presented NCC certificates at the end of the course by Mr Aiyegbusi.

COSON is to follow up its July 1 Lagos forum with similar events in other cities. A Stakeholders Forum is scheduled to hold at the Bolingo Hotel in Abuja on July 20; and another one at the Top Rank Hotel in Onitsha August 4.