‘My eyeballs are my assets’ 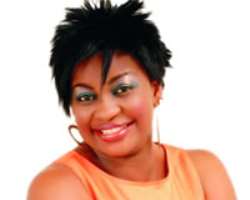 Asunramu Mistura, an actress that has featured in Ija Ola, Adunmadeke, Ayomi, Ohun Oko Somi Da, Emi, Abata, Epo among others, talks about her experience in the industry with SEYI AKANBI.

How has your journey in the movie industry been?
It started in 2002 when I featured in a movie, titled 'Love and Passion'. After a while, I joined Oga Bello's 'Awada Kerikeri Organisation' where I started out playing 'walka-pass'roles. Later, my directors assigned me minor roles. But I thank God now. The journey very rough when I started, but now, the story is different. The number of messages and accolade I receive daily tell me that I am appreciated by my fans.

What are the comments made by your fans?
Some tell me they love me, others call to encourage me. Some correct me, while many castigate me. I'm always elated when I receive most texts, but guys disturb me when they call at midnight only to say that 'I just want tell you are beautiful'. Sometimes it is annoying, because most of these calls come when one's spirit is down. To think that that is when somebody will call and say he is 'my secret admirer'. No matter the mood am in when I receive such calls and messages, I always make sure I don't sound rude. I try to pretend I am pleased with those calls, but truth is, they are disturbing.

You hardly expose your. Is it beautiful enough to be exposed?
No. In movies, I dress according to the dictate of the script and the design of the costumier for the production. As a professional, I am not the one who determines what to wear. Mine is just to accept the roles with the challenges thereof. So, if I am given a role that warrants flaunting some parts of my body, why wouldn't I. Only that I can't act nude because I am an African. Off screen, I dress as simple as possible, though I'm a fashion freak. I like colours. I can't tell you this is my favourite colour or that because I just like colours.

Maybe because you are not fair in complexion...
Maybe. I just like colours and I like dressing to taste. I believe my beauty should be enhanced by my outfit rather showing my body as being beautiful. That is why I prefer wearing clothes that will let people admire my dress rather than my body. For my skin, I think I am endowed with natural skin that can blow off a man's head, though I try to conceal it for my man.

Would you consider toning in order to compete with your counterparts?
This is my God-endowed colour, why would I need to tone or bleach? Colour has nothing to with acting but rather, your facial expression, gesticulation and manners. Moreover, I am not competing with anybody in the industry. There is no point trying to be like another person when my features are being envied by others. The truth is, my skin colour always sets me apart out. What else could I want?

Is it part of facial expression how you always twist your eyeball?
I have very appealing eyeballs and I always use it to achieve what I want. When I was having my training as an actress, I was always told that it was not only the body that matters in acting, but a complementary facial expression. For one to act convincingly for the screen, one cannot shy away from giving credence to facial details. So, my eyeballs have been a great asset in my acting career.

What about your plumpness, is it part of the make-up?
I am not that fat as your question projects. I carry myself swiftly and conveniently. I don't have any problem with my physical structure. And if I later discover that I am going obese, I will have to watch my weight. With the way I am now, I am perfect for any role.

How do you manage advances from opposite sex?
I have been handling it the way any mature lady would. It is a free world and everyone has right to make amorous moves when expressing one's feeling. I always try to be friendly about it. I do appreciate those who show interest in me because I believe they must have liked me before proposing an affair. I try to tell them I appreciate and understand the feelings, but I am engaged to someone else.

What about those in the industry who always demand to have a “crush” before giving a role?
While I cannot deny the existence of such in the industry, it depends on how you present yourself. The truth is that no actress will ever tell you she sleeps with someone to get to role, but we hear that it happens.

There is 'seniority' saga in Yoruba film industry; can u tell us those you can refer to as your seniors in the industry?
I cannot start mentioning names, but there are so many that are not only my seniors, but my fathers and mothers. I have peers and I have people who look up to me.
What about 'husband snatching'...
I'm not yet married, so no one can snatch my husband and I cannot do anything with somebody else's husband.

Among several roles you have played in movies, which one is most challenging?
Sincerely speaking, I will say 'Adepate'. It is a story that was shot three years ago, but is yet to be released till now. It was not easy.

How religious are you?
I am very religious. As a Muslim, I pray five times a day if not working. But if I am working, I sometimes miss some prayer times.

Who is Mistura Asuramu?
I hail from Isale Eko, Lagos State and I studied Mass Communications at Olabisi Onabanjo University, Ago-Iwoye.