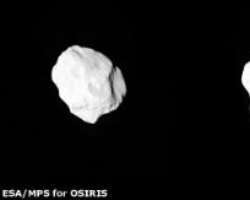 By Jonathan Amos
Europe's Rosetta space probe has flown past the Asteroid Lutetia, returning a stream of scientific data for analysis.

The rock – some 120km (75 miles) in its longest dimension – is the biggest asteroid yet visited by a satellite.

Pictures showed Lutetia to be quite irregular in shape, its surface marked by a number of wide impact craters and even some intriguing grooves.

Rosetta's encounter with the asteroid occurred some 454 million km from Earth, beyond the orbit of Mars.

Seen high above Lutetia is the planet Saturn and its rings

“It's a new world discovered by Rosetta and it will keep scientists busy for years,” said Holger Sierks, the principal investigator on the Osiris camera system which acquired the images on this page.

“The pictures are majestic; they take my breath away,” Professor David Southwood, the European Space Agency's director of science, told BBC News.

“It is an historic day, Europe once again proving it can do major steps in Solar System exploration. Everything worked like clockwork. It really was picture perfect,” he said.

Scientists hope the data can help them determine Lutetia's true nature. Earth-based telescopes have had great difficulty in classifying the rock.

Some observations had suggested it was a very primitive body, little changed since its formation (a so-called C-type asteroid).

Other measurements, though, had spied what appeared to be metals in its surface, indicating the rock might have undergone a greater degree of evolution (M-type asteroid).

Lutetia could even be the fragmented remains of a much larger asteroid smashed apart in a great collision.

Nearly all of the Rosetta mission's instruments were switched on for a period of several hours around closest approach (1544 GMT; 1644 BST; 1744 CEST on Saturday).

Multi-wavelength cameras and spectrometers, magnetic field and plasma experiments, dust instruments, a radio science experiment – all were tasked with gathering as much information as possible as the spacecraft whizzed by at the relative speed of 15km/s (9 miles/s) and a minimum distance of 3,162km (1,964 miles).

“It has an interesting surface and from the look of it, I would say it is more of a C-type asteroid – but we can't really say anything yet,” said Dr Rita Schulz, the Rosetta project scientist.

“We must wait for the infrared data. This will be the key I think in understanding this asteroid,” she told BBC News.

About 400 images were obtained during the pass, and with each picture taking about 10 minutes to come down it will be some days, if not weeks, before all the data from the flyby is transferred Earth.

Science teams expect to make public their preliminary findings at the Europlanet conference in Rome, Italy, in late September.

THE ROSETTA PROBE MAKES ITS CLOSE PASS OF ASTEROID LUTETIA

Most are made of rock, but some are also composed of metal, mostly nickel and iron

Before this flyby, the largest asteroid encountered by a spacecraft was Mathilde, which is a little over 50km (30 miles) wide.

Mathilde was visited by the US space agency's (Nasa) Near-Shoemaker probe in 1997.

Rosetta itself has already made one close asteroid flyby, of the Steins rock in 2008.

With this latest pass complete, Rosetta is now heading out to its meeting with the Comet Churyumov-Gerasimenko, set for the May of 2014.

The probe will go into orbit around the 4km-wide ball of ice and dust and even place a small lander called Philae on its surface.

Asteroids are the object of keen interest currently. The Japanese Hayabusa mission has recently returned from the Itokawa space rock, and next year the US Dawn mission will go into orbit around Asteroid Vesta.

The American President Barack Obama says Nasa should also have the goal of trying to send astronauts to an asteroid sometime in the 2020s.

The detail at closest approach is about 60m (195ft) per pixel. These images show grooves on the surface