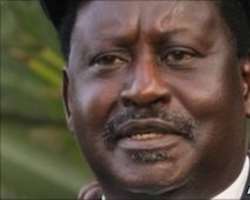 “It is unfair. It is sending very wrong signals to the people of this country,” said Mr Odinga shortly after his release from hospital.

He had an operation to relieve fluid on the brain last week.

The head of the Central Organisation of Trade Unions in Kenya (Cotu), Francis Atwoli, has threatened to call a one-week national strike if the hike goes ahead.

Although the lawmakers approved the 18% pay rise last week, cabinet is due to discuss it on Tuesday.

With a referendum on a new constitution – supported by the majority of government ministers – only a month away, many political observers think the cabinet may drop the unpopular salary increase.

Mr Odinga said he was satisfied with his current salary and urged MPs to consider other priorities.

However, the increase would not come into effect until the next parliament, by which time the post of prime minister might have been abolished if the new constitution is passed.

“Without mincing words, I am totally against the idea of MPs adding salaries to themselves arbitrarily,” Mr Odinga said.

Mr Odinga left hospital on Sunday and has been told not to resume full duties for two weeks.

He became prime minister two years ago when he joined a power-sharing government set up to end months of political violence after his supporters said he had been cheated of victory in the December 2007 elections.