For smoking in movie, I was castigated 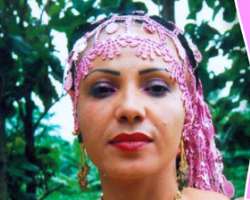 She took sabbatical leave a few years ago from th screen to attend to some personal issues. And with the deal that took her away for three years successfully concluded, Linda Chinyere has staged a come back to the world of make believe where she initially found fame.

Caught at the production set of Guinks Investment limited where she is starring in a new movie 'Enemies Within', the half-cast actress told HVP that “it's a new dawn for me” It is indeed a new era for the movie star who was once castigated by members of her Church for a role she played in one of her movies.

She tell her story…

What's your mission in Asaba?

I'm part of the cast of a new movie coming out soon from the stable of Guinks Ventures,owned by Uzo Godson Nwaosu.

The movie is my first major production in recent times. My last movie role was in 2007. I left because I needed to sort out some personal issues. And that took me away from the screen for three years. But I'm back to the industry to continue from where I stopped.

Where are you based at the moment?

I'm based in Port-Harcourt. But most of the movies I did in the past were shot in places like Enugu, Lagos, and Abuja.
And how did you join the industry?

Surprisingly, I joined the industry in and that was in Port-Harcourt. And I featured in several movies that include “Village Crisis”, “Look into my Eyes”, “King's Desire” “Strange Love' and many others I cannot remember now.

My journey into the movie industry began on the day I visited a friend who was on location. On that day one of the expected actress didn't turn up and I was called upon to try out my acting skills.

It was dream come true for me because I have a strong passion for acting, having been exposed to movies early in life.
After a successful stint, the director who was impressed with my performance invited me to be part of another movie

“Village Crisis” that was shot in Enugu. That was how my career in acting kicked off.

Before then, were you into acting in any form?

No. I am a 2002 graduate of Science and Laboratory Technology from the University of Science and Technology and I have no prior record of acting in the past. I have been a science student right from my secondary school days.

You did you say, you stayed off the screen for three years for some personal reasons?

Yes, I stayed off the screen for some personal reasons which I'm not ready to share with the public at the moment. But I might do that one day.

Someone break your heart?

Did your past come hunting your present?

I don't have a past, rather I have a future. I do not intend to talk about this please.

How did you get involved in this star-studded production by Guinks Ventures?

Mr. Uzo Godson Nwaosu, CEO of Guinks Ventures invited me from Port-Harcourt to be part of this production. I'm playing the role of Odubueze, but I was initially casted for the role of Ego, the mysterious lady and a friend of Mercy Johnson who's playing the lead role.

I got the new role when the director decided I was more suitable for another.

And what were you into in the three years you were away from set?
I was into the business of buying and selling. I travelled abroad to buy Jewelries, clothes and shoes which I sold back home. I'm still doing the business and once production breaks, I will travel out of the country to do my business.

What would say is your saddest experience as an actress?

In the movie “Look into my Eyes” shot in 2007, I played the role of a smoker. Before then I had never smoked. The movie role meant nothing to me as I thought I was just acting a role and didn't see anything wrong with it.

Unfortunately my role was misinterpreted after the movie hit the shelves. As a very prominent member of the Church, I was condemned by fellow worshippers at the local Catholic Church and accused of being a bad influence on the youth.

At a point some members wanted me ostracised.

It hurt. I was sad because I thought that at this level of civilisation, some people cannot differentiate between what is make-believe and reality. People see you in a bad light when they watch you play a bad role in a movie. They tend to identify you with the character you portray on the screen and it's disturbing.

Did that negative reaction affect your faith?

Yes, it did. Sometimes when I think about the whole thing, I feel very sad.