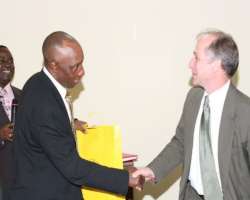 
ABUJA, June 16, (THEWILL) - Determinedã€€to transform the Nigerian National Petroleum Corporation, NNPC, into an integrated national oil company, the Group Managing Director, Engr. Austen Oniwon, has expressed the resolve of the Corporation to sustain the export of petroleum products that meet the environmental and safety requirements of the American government.

Engr. Oniwon stated thisã€€positionã€€todayã€€when he played host to a delegation from the American Embassy at the NNPC Towers, Abuja.

He informed that the Corporation is determined to export value added products to the United States, noting that such an economic partnership would strengthen the bilateral relationship between the two countries.

"As a Corporation, we believe we have built a very strong relationship with America over the years and beyond the energy relationship that we have, we are determined to meet all the requirements to participate in the business needs of America," Engr. Oniwon quipped.

He called on the American Government to invest in the downstream sector of the Oil and Gas industry by participating in the building of Greenfield refineries across the country.

According to him, apart from the Memorandum of Understanding for the building of three refineries signed recently by the NNPC and a Company from China, there is still room for more Greenfield refineries as the Corporation is open and willing to discuss business with the American Government in that area of investment.

The NNPCã€€boss called on the United States to collaborate with the Corporation in the area of surveillance of its pipelines, noting that the three refineries were patterned in such a way that products are ferried through pipelines. He explained that the capacity of the two functional refineries would increase if the pipelines are properly secured.

On the Gas Master Plan, Engr. Oniwon said the primary target is to grow domestic supply by all operators in the upstream sector adding that the Brass Liquefied Natural Gas and Olokola Natural Gas projects are ongoing and basically for export.

Responding, the leader of the American Embassy delegation and Minister Counselor Ball Perry reiterated the commitment of the United States to sustain its investments in energy and agriculture in Nigeria and promised to participate in the building of Greenfield Refineries in Nigeria.

He revealed that the United States through the United States Agency for International Development (USAID) is working on some projects that would boost the renewable projects in Nigeria and provide funding for the surveillance of the Corporation’s pipelines assuring that the collaboration would be of mutual benefit to the two countries.