Hazards Of Beauty:Eye makeup can harm eyesight and make you blind 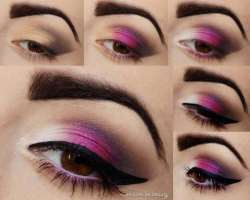 I don’t like gossips, but what can one do when you are in the midst of it all? I was at a wedding reception a few weeks ago when a young woman was led into the hall by a slightly older man whom I presume was her husband. From the way he was dragging her and guiding her to her seat, it was obvious the young woman was visually impaired (eye disorder) and most likely it must have happened fairly recently. They sat about four tables away from ours with the lady facing me.

“That’s Stella,” said a female voice behind me. “Do you know how she lost her sight?” she asked in a sombre voice. “Iwon ‘ba l’an s’oge,” she added in Yorùbá. This is a philosophical statement advising moderation in everything even when using cosmetics to enhance beauty. I restrained myself from looking back lest she stopped talking. The voice said again, “Stella’s blindness was caused by cosmetics.” “How did it happen?” asked another lady sitting by her side. Just as she started narrating what happened, the band started playing and I could no longer hear a thing.

“Can makeups cause blindness?,” asked the woman sitting next to me. I didn’t realise that I was not the only one interested in the gossip. I pretended I wasn’t listening and ignored her question. She tapped me gently on the shoulder and said, “Doc. I am talking to you.” I was taken aback. She and her friends had greeted me when they joined me on the table, but showed no sign that they recognised me.

“I’m sorry. I was at sea,” I apologised, forcing her to repeat the question. “Yes facial cosmetics can cause blindness,” I replied, hoping I would be left alone to enjoy myself. “How?”; she asked again, bewildered. “In two ways and more,” I retorted. As I was about to appeal to her that we should defer the dialogue because I was straining my ears and my voice to override the loud music, there was an interlude and my excuse was no longer tenable. Now I had no choice, but to give an impromptu lecture!

I told her about a young woman who was rescued from blindness from wearing cosmetic coloured contact lenses in an attempt to match the colour of her eyes with her dress and her new car. The lenses got infected and her cornea was almost eaten up by virulent bacteria leaving extensive corneal ulcers in both eyes. But for early and vigorous intervention, she would have become irreversibly blind. To regain her sight, she needed corneal grafting – an expense she couldn’t afford.

“What about the use of tiro?,” asked another lady who had apparently been following our discussion. “Tiro, a traditional black cosmetic powder made from antimony sulphide is used by locals as eye liners on the lids like eyebrow pencils. Many local women especially in the Northern part of the country have become blind indirectly from its use. Usually put in a small pot, the women and children in the house use the same applicator to apply the tiro to their lids. Once the trachoma organism, which is transmitted to the face by flies, gets into the pot, it is disseminated to all users.

Trachoma causes a low grade eye infection which often passes unnoticed. With repeated trachoma infection, the upper eyelids become scarred and turned inwards rubbing on the cornea and causing ulceration. When the ulcers heal they are replaced by white, unsightly corneal opacities which impair vision.

To keep your eyes healthy and beautiful, I would advise you ladies to follow the following tips. Never share eye makeup with anyone. All eye cosmetics should be thrown away after three months because harmful bacteria grow easily in creamy or liquid eye makeups. Should you develop an eye infection, immediately throw away all of your eye makeups. Always apply makeups outside the lash line away from the eye. If you notice an allergic reaction, discontinue its use and see your ophthalmologist.

Avoid products that contain untested or harmful chemicals. If you suffer from dry eyes avoid makeup that will get into your eyes. If you have eye surgery, do not wear makeup around the eye until your ophthalmologist tells you it is safe to do so, and then use only fresh, new makeup.

Remember makeup can make you blind!