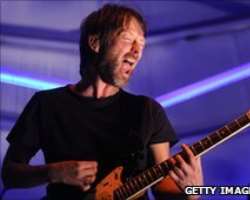 Radiohead let fans name their own price for their last album, In Rainbows

Giving advice to young artists in a new school textbook, he said: “When the corporate industry dies it will be no great loss to the world.

“So, I guess I would say, don't tie yourself to the sinking ship because, believe me, it's sinking.”

Radiohead were signed to EMI for 12 years but released their last album In Rainbows via their own website in 2007.

EMI is now in a particularly precarious position, with major debts and restructuring issues following a takeover by private equity firm Terra Firma in 2007.

The songwriter made his comments in the Rax Active Citizenship Toolkit, published next month by New Internationalist magazine for students of GCSE Citizenship Studies.

'Matter of time'
In the interview, carried out in February, Yorke said the fate of new artists was “an obsession” of bandmate Ed O'Brien, who is a leading member of lobby group the Featured Artists' Coalition.

Yorke said: “When we discuss it, he says it's simply a matter of time – months rather than years – before the music business establishment completely folds.

“He is involved in trying to build a world where artists would finally get paid. But we are up against the self-protecting interests of that industry.”

Radiohead are currently working on new material, but it is not known how they will release it.

Yorke has recently been performing with a new band, Atoms For Peace, and is playing a solo show at the Big Chill festival in Herefordshire in August.