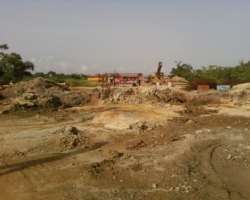 PHOTO: CONTRUCTION WORK AT THE ISOLO-ISHERI-OSUN-IJEGUN ROAD HAS BEEN STALLED BY LACK OF FUNDS.
Listen to article

San Francisco, May 19, (THEWILL) - Consequent upon a 9.3 percent slash from the 2010 budget of Lagos State Government and the subsequent rejection of N74.777 billion supplementary budget by the state House of Assembly, the administration of Governor Babatunde Raji Fashola (SAN) has started facing difficulties in executing strategic road projects in the state. After visiting key road project sites in the state, Babatola Michael writes.

A 9.3 percent cut from the 2010 budget of Lagos State Government has taken a toll on the road projects under construction in the state. Also, a supplementary budget of N74.777 billion the state House of Assembly rejected last week had caused ripple effects on the 2010 fiscal objective of the state which hitherto emphasized project completion, even when the administration never foreclosed awarding new projects.

The adverse effect of the Assembly’s resolve to slash budget by over N40.5 billion and with non-approval of N74.777 billion supplementary budget became apparent when THEWILL visited some project sites in Egbe-Idimu, Ikotun-Igando, Ejigbo, Isolo and Amuwo-Odofin Local Council Development Areas (LCDAs) where Fashola’s administration is currently executing a number of economically strategic road projects to make the state, Africa’s model mega city.

Some of the road projects THEWILL visited include Isolo-Isheri-Osun-Ijegun Road, Association Avenue Road, Shasha-Orisunbare-Ejigbo Road, Yekini-Lawal Road, Ikotun-Isheri Road, Ipaja-Ayobo Road and Iyana-Ipaja-Isheri Road among others. A careful observation during the visit reveal absolute lull at the project sites.

During its tour that cut across 7 local councils, THEWILL observed that the construction firms are either working at a very slow pace or temporarily out of the sites due to what some of their staff members interviewed on the sites ascribed to inadequate funding. This apparently suggests the state government is facing grave financial constraints, which hinder further mobilization of the contractors.

On Association Avenue road, for instance, Messrs Hitech Construction Company was said to have left the project site since December 2009, but the road work is about 60 percent completed contrary to 86 percent completion the Ministry of Work and Infrastructure previously revealed. THEWILL could not spot the equipment of the contractor, but some residents interviewed said the contractor left the project site more than six months ago.

At the site, it was observed that drainage works are almost at completion stage as the road was overlaid with gravels, but yet to be asphalted, a development that has worsened the smooth movement by commuters along Association Avenue, creating dusts and potholes.

Likewise, the Ijegun-Isheri Osun-Isolo and Shasha-Orisunbare-Ejigbo roads were awarded to Messrs Hitech Construction Company. While the firm has not abandoned the projects, the construction works are still going on there at snail speed. When THEWILL visited the road, motorists were seen maneuvering their ways through crater-riddled roads and residents expressed misgivings at the slow pace of construction works commenced more than one year ago.

It was gathered that the contractor returned to the Shasha-Orisunbare-Ejigbo road site last week, but no major work had been done since then. About 100-metre part of the road has been constructed amounting to just one-tenth of the entire road and canal/drainage works already at the advanced stage, but a substantial part of the road has not been overlaid with asphalts.

On the Ijegun-Isheri Osun-Isolo road, the work is going on also at a snail pace. More resources are channelled to the construction of deck-on-pile bridge while the road aspect has not been executed at all apart from clearing. When rains fall, the area becomes flooded, thus creating major gridlocks for both road users and pedestrians to either link the urban centres like Oshodi, Ikeja, CMS, Apapa and Victoria Island where most workplaces are located.

Awarded to Messrs Seg Mashen Nigeria Limited, the Oladunni Ajisafe road has been abandoned for almost one year according to what some residents told THEWILL last week. About 70 percent completed, the road has degenerated with a deep gorge developed at the Igando-Isheri wing of the road. In the case of the Rufai-Yekini-Lawal road, the construction firm has slowed the pace of its activities, though drainages have been constructed almost 75 percent and the road already surfaced with gravels, but not overlaid with the asphalts.

Across all 20 local governments (LGs) and 37 local council development areas (LCDAs) in Lagos, a good number of road projects are being stalled for reasons the state Commissioner for Economic Planning and Budget, Mr. Ben Akabueze recently ascribed to the late passage of the 2010 appropriation law.

As shown in the road statistics THEWILL obtained from the Ministry of Works and Infrastructure, about 123 road projects are currently at different stages of completion while the Fashola administration has successfully executed no fewer than 83 road projects across all the 57 LGs and LCDAs in the state.

At a recent briefing, the state Commissioner for Works and Infrastructure, Engr. Ganiyu Johnson acknowledged that the Fashola administration "has completed a total length of 101.565km of roads in the last three years and a total length of 426.368km of road projects is ongoing," thus representing about 25 percent.

Johnson however observed during the briefing that what "remains to be done, if left uncompleted, is big enough to cast aspersion on the applause already received by this administration, should the political debacle between the executive and legislative arms continue."

Driven by the 2010 fiscal objective of project completion, Governor Fashola had recently asked the state House of Assembly to reconsider some provisions in the 2010 budget with a view to making necessary amendments to enable the state government to discharge its obligations to employees, contractors and other providers.

In a letter addressed to the Speaker of the Assembly, Rt. Hon. Adeyemi Ikuforiji and dated March 22, Fashola wrote that subsequent to "my assent to the 2010 appropriation law, the Honourable Commissioner for Economic Planning and Budget has directed my attention to some provisions of the law."

The governor sought amendments in some provisions of the 2010 appropriation law, particularly as it "affects the state personnel profile and costs, contingency provision for unforeseen expenditure, funding of on-going projects and unpaid vouchers as at December 2009.

"These observations require that the provision in the 2010 Appropriation Law be reconsidered with a view to making necessary amendments to enable the state discharge its obligation to employees, contractors and other service providers to and in particular, to pursue strategic agriculture initiative to stimulate jobs and provide security of food, particularly staples and vegetables in the short to medium term," he said.

But the Assembly declined the request of the governor to get an approval for a supplementary budget of N74.777 billion required to fund installation of critical infrastructure, construction of strategic road networks and tidy up 15 percent salary increase and 27.5 percent teacher salary structure (TSS) appropriated for in the 2010 budget.

Explaining why the supplementary budget was rejected, Speaker of the Assembly, Rt. Hon. Adeyemi Ikuforiji warned the State Executive Council against incurring more loan facilities both internally and internationally. This was explained on the government’s dearth of financial wherewithal to adequately manage the credit facilities.

Ikuforiji succinctly explained the ground for the resolution of the Assembly as follows: "The state government is borrowing too much. Currently, it has a debt profile of N100 billion. I do not think we can encourage this administration to move faster than that simply because we do not have commensurate income to offset the borrowing." But whatever reasons the speaker adduced to the budget reduction and subsequent rejection of N74.777 billion supplementary budget, the reality today is that the resolutions of the Assembly are having grave impacts on Lagos road projects.