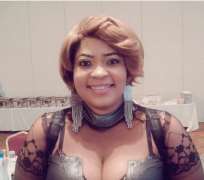 Curvy Yoruba actress, Biodun Okeowo better known as Omo Butty, is currently having a nice time abroad as she celebrates her son who recently turns a year older.

The actress has been one of many entrepreneurs who have been working very hard both in her business and her career and she is doing well for herself.

The actress, who now has two business empires to her credit recently explained that working so hard was part of the training she got while growing so as not to depend on any man which is what is playing out.

In her words, “I was raised to hustle and work hard like a man because I was told never to depend on me but love to enjoy like one.”