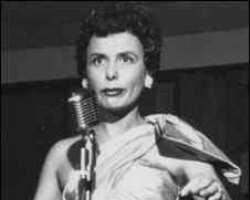 The US singer and actress Lena Horne has died in New York at the age of 92.

In 1943, she played Selina Rogers in the all-black film musical Stormy Weather, the title song of which was to be a major hit and her signature tune.

Her career spanned more than 60 years. Later she embraced activism and became a voice for civil rights in the US.

When asked about her success, Ms Horne once said: “I was unique in that I was a kind of black that white people could accept.

“I was their daydream. I had the worst kind of acceptance because it was never for how great I was or what I contributed. It was because of the way I looked.”

In 1981, her one-woman show, the award-winning The Lady and her Music, based on her life and career, ran for more than a year on Broadway and in London.