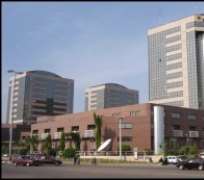 The Port Harcourt refinery, which has a capacity of 210,000 barrels a day, has restarted production, the spokesman for Nigerian National Petroleum Corporation, NNPC, said yesterday.

'It is not in full capacity. Production is between three and five million litres daily,' Group General Manager, Public Affairs of the NNPC, Garba Deen Muhammad, said.

Despite being Africa's largest crude exporter, Nigeria imports almost all of its gasoline. Dollar shortages and the shutdown of its refineries have for weeks left motorists queuing for petrol across the West African nation.

NNPC said this month it planned to restart its 110,000-barrel-per-day refinery in the northern city of Kaduna by mid-April.

Nigeria has a refining capacity of 445,000 barrels per day from three refinery companies but they have been mostly shut due to years of neglect and corruption.

'Port Harcourt has been refining for quite a while now, from last week, between three and five million litres. We expect Kaduna refinery to begin any time soon and we also have vessels discharging fuel and so, all these combined measures will bring down the situation. Still, there are some hitches here and there but improvement is what we are counting on and it is what we should be expecting.' Muhammad said.