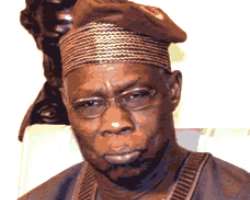 Condemnations have continued to trail statements credited to former President Olusegun Obasanjo, over the weekend, that the Peoples Democratic Party (PDP) did not reach an agreement on rotational presidency between the North and South, with the 2011 elections approaching.

The criticism came even as the Chairman of the Northern Senators Forum, (NSF), Senator Umaru Dahiru, a PDP stalwart from the North West zone, which produced ailing President Umaru Yar'Adua, said, as far as they were concerned, they stood by the party's position.

Speaking on the Voice of America (VOA), last week, Obasanjo had said, 'nothing like rotation of power existed, as the party never concretised that arrangement.'

Kaita who told Daily Sun in a telephone interview there was indeed an agreement to the effect that the South would produce the President for eight years of two terms each, while the North also did same. He argued that, based on the arrangement, the north was only serving out its first term.

He further said that if there was no such an agreement as being claimed by Obasanjo, there was no way he would have got his second term in 2003.

Also reacting, Senator Joseph Waku and National Vice Chairman, Arewa Consultative Forum (ACF) told Daily Sun that the former president's antics on the eve of his departure, after losing out in his tenure elongation game, showed that he was working towards the disintegration of Nigeria.

Waku expressed surprise that a beneficiary of an arrangement that ensured that he got two terms, would now turn round to dissociate himself from it.

'Obasanjo has been aiding and abetting the disintegration of Nigeria. How could a beneficiary of an arrangement, turn around to denounce it?

'If not for zoning, would he had been president? The zoning arrangement, of which every Nigerian child of five years knew, for Obasanjo to disassociate himself from it, is sadistic . Only a sadist would behave in such a manner.'

The ACF national vice chairman, however, denied that the forum is polarized over the call for a president from the region in 2011.

Niger State Governor, Babangida Aliyu and chairman of the Northern Governors Forum, had last week, at the 10th anniversary of the ACF expressed consternation over the region's insistence to produce the president in 2011.

But reacting to the Niger State governor, Waku told Daily Sun that Aliyu's position, neither represented the views of northern leaders, nor a dominant position of the Northern Governors Forum.

Speaking in the same vein, via telephone and in apparent reference to the statement the National Chairman of the party, Chief Vincent Ogbulafor's statement recently that the Presidency slot was zoned to the North, Dahiru told Daily Sun that as a lawmaker and a PDP member, he stood by the position of the party, and believed the same would go for other members of the NSF who were of the PDP.

When reminded that Obasanjo's comment was coming after Ogbulafor's, Dahiru asked,' between an individual and the party, which is greater? I mean who should be taken more seriously? I think Obasanjo is entitled to his opinion, but as far as we are concerned, we stand by the party's position,' he said.

Lending his voice to the debate, pioneer National Chairman of the Action Congress (AC), Alhaji Hassan Mohammed Zurmi, who had since returned to the PDP, with Atiku, told Daily Sun on phone that Nigerians should not in any way be surprised at Obasanjo's comment. He said the former president was one that blew 'hot and cold' at the same time.

He further said that sometimes when Obasanjo said 'yes,' he actually meant 'no,' and queried, 'how could someone whom every Nigerian knew was a product of zoning arrangement, turn round to say there was nothing like that.'