Who Is Really After Rotimi Amaechi? 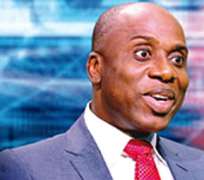 This question has become pertinent following the 2016 Budget saga and the narratives trending in the media. Why has Rotimi Amaechi suddenly become the centre of the discussion and the scapegoat? In all of this, I have waited patiently to hear or see anyone come out publicly to quote with precision any comment credited to Rotimi Amaechi on this matter that could be alleged to have triggered this whole crisis for which he is now been vilified and persecuted before Nigerians.

The present Budget sage started with Mr. President's refusal to assent to the Appropriation Bill without verifying its content. I have carefully listened to everyone on this matter and nobody has shown that it was Rotimi Amaechi who advised and convinced Mr. President to take such position. After the Emergency Federal Executive Council meeting, the Council issued an official statement in which it alleged that for some adjustments made by the National Assembly, the Budget "cannot be implemented" as it is. There was nothing from that Statement suggesting that the Minister of Transportation took that decision or influenced it, neither did he address the press to convey the decision. The question then is: is Rotimi Amaechi now the President?

In fact, I had the privilege of listening to the House of Representatives Committee Chairman on Appropriation Hon. Abdulmunin Jibrin during his appearance on Channels Television programme (Sunrise Daily) today (Monday), who himself was the first to speak about the matter publicly on behalf the National Assembly. He unequivocally said he could not confirm that Rt. Hon Amaechi made any comment, but based his entire statement on assumption, as he continuously prefaced his statements with: "if he said such"; "if indeed he said so". He confirmed that the bases for his statement were reports on social media.

I also heard him say that similar issue occurred in the Ministry of Health's and Ministry of Works' appropriation, and went ahead to explain the scenarios. Not calling for the antagonism or persecution of other persons, I ask the question: why are the Ministers of Health and Works not as much on the news and persecuted on this same issue as Rotimi Amaechi? Why is Rotimi Amaechi singled out? Why have both the Senate and House of Representatives taken such a posture against a person who has not spoken on the matter, to either cast aspersion on them or corroborate their story?

Senator Gbenga Ashafa, the Senate Committee Chairman on Land Transportation, who is the only person that has so far given a clear account of what transpired has confirmed that the Lagos - Calabar Rail Line, the subject matter, was part of the projects that the Minister of Transportation defended before his committee and that his committee in turn defended the project before the appropriation committee. He maintained however that it was not contained in the Budget Document submitted to National Assembly by Mr. President. Another question: Shouldn't the National Assembly have waited for the Minister of Transportation to have joined issues with Senator Ashafa, either to disprove or agree with him?

Curiously, the Senate went ahead, without hearing from the Minister in question, without an official statement from the Ministry of Budget or Budget Office, or from the Presidency that disagrees with Sen. Ashafa, but most regrettably relied on Social Media stories and reports to reprimand and vilify Rt. Hon Rotimi Amaechi and even went ahead to call for his apology or resignation. What a pitiable situation!

It is even more worrisome the extent to which the Senate, a very distinguished institution, could rely on "unofficial communication" on social media, to lower the person of a Minister, vilifying him with such uncouth remarks as "this latest antics of this particular minister of transportation, Rotimi Amaechi, is reckless, uncalled for and dangerously divisive". The Distinguish Senate in its haste to make the Minister for Transportation the scapegoat tied to accuse him of "setting the people of the southern part of the country against their northern compatriots, it potentially sets the people against their lawmakers from the concerned constituencies and sets the lawmakers against themselves".

Ironically, it is indeed the actions of the National Assembly so far that rather put these concerns on the national burner and raise the bigger questions: is it because the Minister of Transportation is of the southern part and not the northern that he is singled out to be humiliated and vilified? Is it because some other ministers are of certain parts of the nation that is the reason they are not called upon to apologize or resign?

I totally do agree with the Senate that "reprehensible Mischief has no place in a democracy". Equals should and must be treated equally. Equally in regional development, equally in respect for dignity of persons, and equally in association of like terms. This is the take in the Rule of Law; and main of democracy.

Achi William-Wobodo is a Lawyer and Development Analyst.