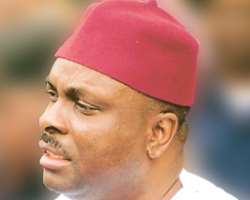 Ibori has been in hiding since last week when the EFCC declared him wanted for refusing to appear before the Commission and answer to questions raised in a petition written against him by the Delta State Stakeholders and Elders Forum.

Efforts by operatives of the anti-graft agency and the police to arrest him in his hometown of Oghara, Delta State on Tuesday were thwarted by more than 1,000 youths who engaged the law enforcement agents in a gun duel.

But Saturday Punch investigation revealed that the former governor had been sending emissaries to the Presidential Villa to beg Jonathan to prevail on the EFCC Chairman, Mrs. Farida Waziri, to change her hardline posture in respect of the anti-graft agency's bid to arrest and put him on trial.

Among those believed to have visited the Acting President to plead for Ibori is the Minister of Niger Delta, Mr. Godsday Orubebe.

According to a source who spoke on condition of anonymity, Orubebe went to Jonathan after receiving the Delta State Governor, Dr. Emmanuel Uduaghan, in audience in his Abuja office on Tuesday.

Uduaghan had paid a courtesy call on Orubebe to discuss issues relating to his appointment and the desired development of the region.

But the source disclosed that he also used the visit to plead with Orubebe, reputed to be one of the closest ministers to Jonathan, to reach out to the Acting President on behalf of Ibori.

Ibori is Uduaghan's first cousin. Ironically, the Delta State Governor had opposed the nomination of Orubebe as a minister.

The source said, 'Ibori has been mounting pressure on Jonathan every few hours to prevail on the anti-crime bodies to drop the issues against him.

'But the Acting President is surprised that people are linking the issue to him. He wonders if they expect him to provide a presidential shield for people who have matters to settle with the law. There can be no two laws for different people in the country,' the source said.

It was learnt that Jonathan had told his aides that he was surprised that people were approaching him on the Ibori matter with the EFCC, saying that he had nothing whatsoever to do with Ibori's face off with the law.

The source stated further that Jonathan had been insistent on leaving Ibori to settle the issues he had with the law, stressing that it would only be fair for him to be subjected to the law.