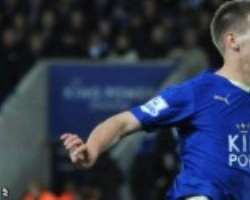 Leicester missed the chance to go five points clear at the top of the Premier League as West Brom came from behind to claim a thrilling draw.

Salomon Rondon shrugged off Robert Huth to give West Brom the lead, but a Danny Drinkwater deflected shot levelled it.

Andy King finished a wonderful move to put Leicester ahead only for Craig Gardner to equalise with a free-kick.

Leicester twice hit the bar at a raucous King Power Stadium, but could not find a winner.

The draw leaves the Foxes three points ahead of Tottenham, who can go top with victory at West Ham on Wednesday, and six ahead of Arsenal, who face Swansea.

West Brom, who have now lost only two of their past 10 league games, stay 13th – 12 points clear of the relegation zone.

No negatives despite draw – Ranieri
Leicester were below their best on Saturday but still managed to beat Norwich thanks to a late winner – here they were much improved, but could not conjure similar drama despite laying siege to the West Brom goal.

West Brom may have planned to concede possession and defend deep, and they were duly bombarded by wave after wave of Leicester attacks, mainly down the flanks through the excellent pair of Riyad Mahrez and Marc Albrighton.

On Saturday, the Foxes had 13 attempts on goal – here they had 22, with headers from Jamie Vardy and Shinji Okazaki hitting the woodwork.

Ben Foster also saved well from Jeffrey Schlupp and Wes Morgan, while Leonardo Ulloa could not repeat his weekend heroics when the ball flashed across the face of goal in the very last minute.

West Brom could have been forgiven for thinking that allowing Leicester the lion’s share of possession was a sound approach.

Against Norwich, Leicester had the majority of the ball for only the third time this season and struggled. Whether by design or necessity, the Baggies were happy to sit back in the first period, especially after Rondon got on the end of Darren Fletcher’s through ball to put the visitors ahead.

However, even with nine red shirts behind the ball, Leicester still found a way to lead, meaning West Brom had to make more of the play in the second half. It worked to their advantage as, after Mahrez needlessly handballed, Gardner curled in a sublime free-kick.

Rondon could even have won it but somehow turned over from inside the six-yard box, and the Baggies ultimately needed some fortune to hang on at the end of a breathless night.

King was making only his seventh league start of the season, in the side for the injured N’Golo Kante.

The Welsh midfielder is the only member of the Foxes squad remaining from their time in the third tier seven years ago and has winners’ medals from both League One and the Championship.

Here he looked to have taken a stride towards adding a Premier League medal when he met Mahrez’s athletic back-heel to finish sharply past Foster.

But in the end the odds on King completing an unlikely hat-trick lengthened – and Leicester could be back to second in the table as early as Wednesday night.

What they said
Leicester manager Claudio Ranieri: “I am very pleased with our performance. They played so well – there was no panic after the first goal. We played much better than against Norwich. I am satisfied with the performance. Just sometimes you can do everything but the ball doesn’t want to go in.

“I want to create a lot of chances and sooner or later we score. Tonight wasn’t the right moment but we are alive and we fight to the end. Everybody is ready to fight, to play well, to create chances. Only the victory was missing.

“We tried to do everything and well done to my players. We never never give up. We always try the best in every situation. Every team plays football and we have to find the solution and try to win. It is important not to lose the match too as they could have counter-attacked.”

Pulis happy with Baggies’ form
West Brom manager Tony Pulis: “Leicester are a good side. They ask questions of you.

“It’s another point on the way for us. It’s important for us to get to 40 points and we are happy with the way things are going. We need the hunger and desire to get to 40 points. We should have kept the ball better tonight. I’m really pleased with the players though.