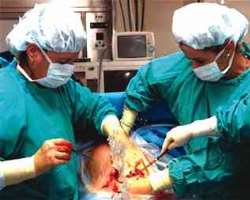 A caesarean section
Caesarean rates have reached a record high in the United States, with nearly one-third of babies born that way in 2007, a new government report shows.

Between 1996 and 2007, the C-section rate rose by 53 per cent, with similar rises seen among all age, racial and ethnic groups, according to the report released Tuesday from the US Centres for Disease Control and Prevention's National Centre for Health Statistics, which used birth certificate data to arrive at this conclusion.

Six states saw increases of more than 70 per cent. Those states include: Colorado, Connecticut, Florida, Nevada, Washington and Rhode Island, although researchers said the C-section rates may have been somewhat lower to begin with in those states.

The five states with the highest C-section rates are: New Jersey (38 per cent), Florida (37 per cent), Mississippi (36 per cent), and Louisiana and West Virginia (35 per cent).

After a slight dip in the late 1990s, C-section rates began marching relentlessly upward again. The pace of the increase has accelerated since 2000, with the overall rate surging from 23 per cent to 32 per cent in 2007.

'These data are important because we are trying to monitor the health of women and babies, so that both professionals and the public can look at the trends,' said report author Fay Menacker, a National Centre for Health Statistics statistician.

There were 1.4 million caesarean births in 2007. Preterm babies had the highest rates of caesarean deliveries, as did older mothers. About 48 per cent of births to women aged 40 to 54 were C-sections, compared to 23 per cent of women under 20.

The rise in C-sections is probably due to a variety of factors, including older maternal age, fears of litigation and changes in the way physicians do their jobs, Menacker said. Prior research has shown ob-gyns are less likely to deliver babies in a breech (feet or buttocks first) position vaginally than they were 10 or 20 years ago, and are less likely to use forceps or vacuum extractions in deliveries.

'I am not criticising them or saying it's better or worse, it's just different,' Menacker said.

Another factor is hospital policies that discourage women from attempting a vaginal birth after a prior C-section, said Dr. Joseph Fernandez, division director of obstetrics and gynaecology at Scott & White Health care in Round Rock, Texas.

Women who attempt a vaginal delivery after a C-section are at a slightly increased chance of a ruptured uterus, a serious complication that can lead to hysterectomy or death to the mother and the baby, Fernandez said. Though studies show rupture happens in less than one per cent of deliveries, it's a real risk that requires an emergency C-section.

To deal with the worst-case scenario, American College of Obstetricians and Gynaecologists guidelines stipulate that any hospital offering vaginal deliveries after C-sections needs to have an anesthesiologist immediately available.

Many hospitals have interpreted this to mean the anesthesiologist has to be present at the hospital (not just 'on-call') during the labour. The problem is that many smaller, community hospitals don't staff to that level, so they either don't offer vaginal birth after a caesarean delivery or they discourage women from trying it, Fernandez said.

Yet another reason for the soaring rate of C-sections is maternal choice. Some women, especially those who went through a difficult labour that ended in a C-section, opt for a C-section the second time.

'Some patients say they don't want to go through a vaginal delivery,' Fernandez said.

In part due to concerns about rising C-section rates, earlier this month a panel of experts convened by the US National Institutes of Health said most women who have had a caesarean delivery can safely have a vaginal delivery later.

In addition, C-sections cost almost twice as much as vaginal deliveries, according to the report.

'The big thing we have to do is educate our patients, counsel them thoroughly and let them know the literature supports the use of vaginal birth after C-section,' Fernandez said. 'That said, I'm not going to do anything heroic to deliver a baby vaginally. If there is any indication labour is not progressing or the baby is not tolerating labour, we will evaluate things and determine if we need to do a C-section. Ultimately we want a good outcome for mom and baby.'