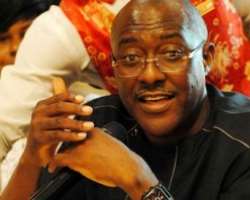 A Federal High Court sitting in Abuja on Friday granted bail to the national publicity secretary of the People's Democratic Party, Olisa Metuh, in sum of N300 million.

Metuh is standing trial for allegedly destroying the written confessional statement he made to the Economic and Financial Crime Commission (EFCC).

He was also ordered by the court to provide two sureties who have properties in Abuja, each in like sum.

According to the anti-graft agency,  the DPD spokesman tore  and attempted to swallow the confessional statement he made to EFCC in regards of a seven-count charge of alleged fraud preferred against him by the EFCC.

Metuh, who had earlier on Tuesday appeared before a Federal High Court in Abuja over his involvement in the now famous $2.1 billion arms deal scandal, was  docked by the Economic and Financial Crimes Commission (EFCC) before an Abuja High Court sitting at Maitama, on the latest charge.