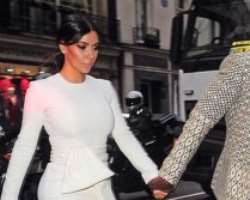 Uh-oh, it sounds like there is trouble in paradise for Kim Kardashian and Kanye West, just six weeks after they welcomed their second child, Saint, together.

We're seriously hoping that this is nothing more than a rumour…

View photos
According to new reports, our fave couple have been arguing over their future, with Kanye apparently keen to extend their family and have a third baby, but Kim putting her foot down.

Especially because Kim has suffered with medical problems throughout both pregnancies and doesn't think that she'll be able to carry a third baby.

A source explained: “Kanye thinks she shouldn't be making any permanent decision about future babies right now because she's so depressed about her body.

View photos
“But Kim is sticking to her position that this was her last pregnancy.”

It is thought that doctors told Kim that she would struggle to get pregnant again after she gave birth to Saint, with the 35-year-old star suffering from placenta accrete during both pregnancy, which occurs when blood vessels become too deeply attached to the uterine wall.

Doctors apparently said that if Kim fell pregnant again then she'd be putting herself and the unborn baby at risk, and although Kim has considered surrogacy Kanye is said to be less keen on the idea.

View photos
The insider added to RadarOnline: “He wants to continue growing the family and he's 'creeped out' by the idea of surrogacy. But he has no choice because Kim's already looking into getting her tubes tied or an IUD put in.”