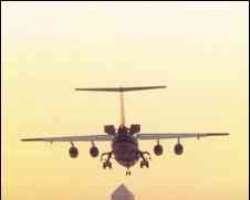 By Stephen Mulvey
BBC News
If the 1820s are any guide, the volcanic ash from Eyjafjallajokull could be with us for a while – so can we find ways of flying around or under the cloud?

The last time it erupted, in December 1821, it continued puffing out ash for about about a year, on and off. So, if the pattern is repeated, ash clouds can be expected to waft across Europe every time there is a sustained north or west wind.

That means a lot of disrupted travel plans, unless airlines can learn to navigate a safe path through or around the obstacles.

However, while this may be technically possible, experts say it is not a practical solution.

Lidar
The current combination of high pressure and a northerly wind has created what atmospheric scientist Professor Geraint Vaughan likens to a “pile of poppadoms” in the air above us.

Using a cousin of radar, known as lidar, he is able to pick out thin layers of fine ash at different heights in the atmosphere above Aberystwyth, in Wales.

On Tuesday, a lidar instrument is being taken on a Met Office BAe 146 jet aircraft to get a picture of the “highly-laminated structure” of the atmosphere across the UK.

The pilot will be able to use it to find an ash-free altitude to fly at – though the plane may need to fly through some ash to get there.

“We can measure where the ash is, at what heights, and the thickness of the layer,” says Professor Vaughan. “We have learned it's at all kinds of heights, from about 1km to the aircraft-cruising altitude of 10km-12km.”

So, would one solution to the problem be to add lidar to the controls on a commercial aircraft and allow pilots to dodge the ash?

Going under?
“You would massively increase the dangers of a collision,” says CAA spokesman Richard Taylor. The pilot cannot see what's around him, Air Traffic Control can

Richard Taylor, Civil Aviation Authority
“The whole point of flying in controlled airspace is that pilots are under the control of an air traffic controller. He tells them what altitude to fly at, to ascend or descent a couple of thousand feet, to get out the way.

What about flying under the ash? Some European airlines have conducted low-altitude test flights and claim to have experienced no problems.

Professor Vaughan's observations make clear that there is no altitude at which aircraft are guaranteed to avoid ash.

Also, at very low altitudes, the air contains a range of fine particles that it is best for jet aircraft to avoid.

Kjetil Toerseth, director of regional global pollution at the Norwegian Institute for Air Research, told the AFP news agency: “There is no altitude that is completely safe below 11,000m.”

But that is only part of it.
A British Airways spokesperson said flying at low-altitude would only be an option for short-haul flights, because of the vastly increased fuel consumption.

“You could not do it across the Atlantic… Cruising at 35,000 feet the fuel-burn is very low, because the air is thin. You could not load enough fuel to fly at low altitude,” the spokesperson said.

She added: “If everyone flew at low altitude, there would not be enough room in the sky.”

Hard slog
Flying round the ash cloud – another option – is complicated by the fact that it cannot be seen.

Satellites only show dense ash, and you cannot judge its altitude.

Using computers to model the likely drift of the cloud, as experts have been doing in Europe for the last few days, gives only an approximate location. We have to send as many aircraft up there as possible – without passengers – to find out what we don't know

David Learmount, Flight International
Richard Taylor at the CAA said a more feasible solution to the problem, in the long-term, would be to make changes to aircraft engines.

“We are talking to manufacturers at the moment. They are reviewing their policy on how much ash they think it's safe for engines to ingest, and they are preparing to build into the design process more robust measures for ingesting ash,” he said.

David Learmount, operations and safety editor of Flight International magazine, also argued that the vital next step was to gather more information about the effect of widely dispersed very fine ash particles on engines.

“Is there a silver bullet? Absolutely, definitely not,” he said.

“It's going to be a hard slog. We have to send as many aircraft up there as possible – without passengers – to find out what we don't know. The airlines that carried out test flights say they had no problems, but how do they know they didn't get lucky?

“When the weather changes the ash will go away, but we must not forget it, because it will come back.”