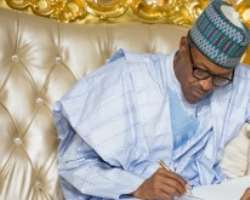 It is almost seven months since Buhari was inaugurated as President and about ten months since he defeated President Jonathan in the March 28 presidential election. It is also more than a month since the retired army general inaugurated his ministers – after ruling the country as a sole administrator for almost six months.

I have previously argued that Buhari's stuttering; if not disappointing start, is not unusual for a new regime because just as it takes a while for an aircraft to get to a cruising height after a take-off so it is often for new governments to master the terrain. I thought one year after inauguration will be a reasonable length of time to start drawing conclusions from our observations and call out the government.  This however does not mean that we should abandon our role as public individuals to help keep the government on its toes. The difference is that whatever lapses we observe now we are willing to attribute to mistakes of the head, not of the heart.    After one year we can attribute lapses to both mistakes of the head and that of the heart.

In the nearly seven months that Buhari has been in power, a number of observations could be made:

One, the man is a bundle of energy that belies his age. At 72, he walks spritely – almost as erect as the letter 'i'.  Buhari's energy mocks those who made mockery of his age during the campaigns. At the same time it raises concerns in some quarters on whether he can sustain this energy level or whether he is setting himself up for a quick burn out?  I have lost count of his globetrotting since he became President.

Two, more than a month after his ministers were inaugurated, several of the ministers appear to thread as cautiously as possible – as if they want to take all the time in the world to decode Buhari's famed body language. Under Obasanjo – arguably the most self-assured and cosmopolitan of the country's presidents – ministers had the room to take risks and would receive political cover from Obasanjo when they inevitably come under public criticisms or when the owners of the toes they stepped upon decide to fight back. Under both Yaradua and Jonathan, political covers seem to be quickly withdrawn from many loyalists who come under public criticisms or are victims of whispering campaigns from jealous colleagues. It is doubtful if the likes of El-Rufai, Nuhu Ribadu and Chukwuma Soludo who stepped on powerful toes in the course of their jobs would have been able to keep their jobs under any other leader but Obasanjo. Will Buhari be willing to provide enough political cover for his ministers to take risks?

Three, how willing is Buhari to learn from history? Let me give a simple example with Boko Haram. There is fairly a consensus that until 2009 the group more or less went about its business peacefully, even if they were a little unruly.

On June 11 2009 following a row with the police over the members' refusal to wear crash helmets in Maiduguri, Borno State, several sect members were killed.  Yusuf was said to have vowed to avenge the death of his members, which he allegedly did three days after the incident. The chain of events triggered by this reportedly led to the death of some 800 sect members. Yusuf himself died in police custody and what was meant to be a 'final solution' for Boko Haram ironically ended up radicalizing the group.

Fast forward to mid- December 2015. There were reports that several Shiites (some reports quoted figures as high as 1000) were killed in Kaduna in clashes with soldiers over claims that the group had planned to assassinate the Chief of Army Staff  Lt.-Gen. Tukur Buratai . The leader of the sect Sheikh Ibraheem El-Zakzaky was also arrested.

Before the reported massacre of Shiites in Kaduna, the government had also detained Nnamdi Kanu, leader of the Indigenous Peoples of Biafra (IPOB) and director of Radio Biafra. That action alone turned an otherwise innocuous individual into a mythical figure that spurred days of protests across many parts of the South- east, south- south and even beyond the borders of the country. The more things change the more they remain the same.

Four, the pattern of political alliances in the country may be undergoing some imperceptible changes.  Given the North-South political dichotomy, the President and Vice President are not expected to come from the same side of the political divide.  The common assumption was that in the south, the south-east and the south-south are the North's (essentially the so-called core north's) natural allies while the South-west are masters in playing opposition politics. For the first time in the country's political history, Igbo political elites appear to have swapped roles with their Yoruba counterparts – and surprisingly seem to be enjoying it. Hitherto, the Igbo political elites were known for their doctrine of “the goat follows the man with the palm fronts” – a certain craving to always be part of the politics of the centre. With the pattern of alliances among regions likely to become more fluid now than ever, it is hoped that this will goad the different regional factions of the  elites into cultivating traits  that will make them beautiful brides in the “political game” (apologies Jibrin Ibrahim). Such qualities will include reliability, loyalty and ability to deliver block vote. The fact that smart alliances can neutralize population advantages and disadvantages may become open political cards.

Five, related to the above is the puzzle of how some Igbo elites and 'Internet Warriors' have become former President Jonathan's greatest defenders since he lost power – more than his Ijaw brethren. What made several Igbo elites and 'lumpen proletariat' to develop a sense of co-ownership of the Jonathan Presidency despite the fact that Jonathan is not Igbo and the argument in some quarters that the Southeast in fact received the least capital projects under his presidency than other zones of the country? How come that the Igbo political elites never had a similar sense of co-ownership of the Obasanjo regime despite that fact Obasanjo appointed probably more Igbos to influential positions than Jonathan did? I believe that knowing how this sense of co-ownership was developed could be useful to regimes trying to build critical support.

Dasukigate
The reported admission by Sambo Dasuki, the former National Security Adviser that he disbursed stupendous sums of money (in both local and hard currency) to sundry individuals appears to be undermining the public sympathy he had enjoyed over his arrest and detention. There is however the danger that the almost daily revelations of the humongous sums disbursed without appropriation will quickly lose their shock value as people start craving for new storylines. The bottom line is that revelations of possible embezzlement or diversion of mind-boggling sums of money cannot be effective substitutes for policies that will fix problems, create wealth for the country and jobs for the army of the unemployed. The revelations may at best satisfy some people's baying for blood and provide entertainment to others.

N5000 monthly for unemployed graduates?
President Muhammadu Buhari is reportedly proposing a budget of about N8 trillion for 2016 – twice the size of last year's budget of N4.4 trillion. This is another contradiction of the Buhari regime which is supposed to be an austere regime. A good chunk of this huge sum at a time of dwindling oil revenue – will be to pay unemployed graduates N5000 per month. Ordinarily the idea of unemployment benefit should be a welcome idea but one would have thought that the first step would be to develop the necessary framework, including the exact number of potential beneficiaries, how leakages should be avoided and where the money will come from.  Just as the government chose to continue paying billions of naira in subsidies to oil marketers (while reporting to the world that the country is broke), this will become another hole draining the country's meagre resources at a time  many state government are owing their workers several months' arrears in salary. Wouldn't more be accomplished by simply investing in schemes that will help the unemployed to create jobs for themselves – and hopefully also employ others?