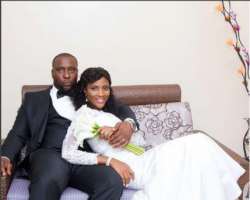 The year 2015 has seen lots of celebrities walk down the aisle and as the year come to an end in few weeks' time, more stars are excitedly saying 'I do' to their lovers.

Theresa Edem, one of Nigeria's fast-rising actresses, got married over the weekend to the love of her life. The Akwa-Ibom born TV star had her traditional and white wedding on Saturday, December 12 at her hometown.

Edem is known for replacing Matilda Obaseki as Angela in 'Tinsel'. She also starred in movies such as 'After the Proposal' with Uche Jombo and Patience Ozokwo. She played Isioma in 'Hotel Majestic'.