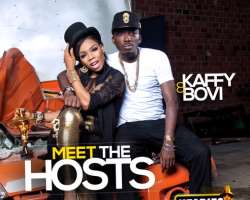 Lagos|Nigeria: Dance icon Kaffy and standup comedian Bovi have been chosen to host the 2015 edition of Nigeria’s most prestigious annual music awards show, The Headies, holding on December 30 at the Landmark Events Centre, Lagos.

Following in the tradition of celebrity hosts at the yearly extravaganza which began in 2006 with Dare Art Alade, the duo are expected to bring the best of their worlds together for a special audience treat at the awards ceremony which has the theme “Flip The Script” this year.

They become the eighth celebrity host couple at the awards event after Tope Adelana and D’banj in 2007, Dakore Egbuson and Basketmouth in 2008, Kemi Adetiba and Banky W in 2009, Rita Dominic and eLDee in 2011, MI Abaga and Omawumi in 2012, Dr. Sid and Tiwa Savage in 2013, and Toke Makinwa and Basketmouth in 2014.

Speaking after she was revealed as this year’s co-host, Kaffy commented,

“I’m really, really excited. This is like a dream come true for me because this is Nigeria’s biggest annual music event and it’s going to be such a rush to get up in front of all those thousands of people present and the millions watching on television at home and present awards to Nigeria’s biggest artistes. It’s an honour for me and I just can’t wait for December 30! I’m sure Bovi is excited as well!”

Held annually since 2006 when it was then known as the Hip Hop World Awards, the Headies has grown to become the Nigerian music industry’s flagship annual event and one of the most eagerly anticipated events on the Nigerian entertainment calendar every year. Over the years, the Headies has crowned some of Nigeria’s biggest names in music including D’banj, Wizkid, Patoranking, Sean Tizzle, Olamide, Davido, Banky W, MI, Timi Dakolo and many others. The 2015 edition of the awards holds on Wednesday 30 December, 2015 at the Landmark Events Centre, Victoria Island, Lagos.