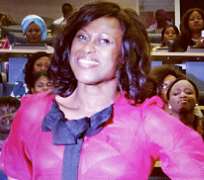 Nollywood actress, Uche Jombo-Rodriguez and her mother-in-law have joined others to raise awareness on the importance of early detection of breast cancer in woman.

In recent times, many women have had headaches on breast cancer, which is presently on the increase in the society.

Uche and her mother-in-law were dressed in pink outfits to pass the crucial message of early detection of the terminal disease.

They joined others in the Go Pink campaign initiated to raise the awareness among women.