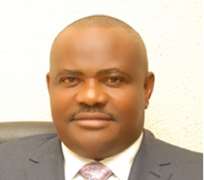 Following a spate of recent negative outcomes for the Rivers State Governor, Nyesom Wike and the Peoples Democratic Party (PDP) at the various Election Petition Tribunals sitting in Abuja, the Rivers State Chapter of the All Progressive Congress (APC) has alleged that the Governor has commenced negotiations to borrow a whopping N10 billion from Zenith Bank PLC for the sole purpose of bribing judges of the Tribunals, Appeal Courts amongst others.

In a press statement signed by Chris Finebone and made available to NF-Reports explained that to date, the Governor has collected a total of about N100 billion comprising Federal allocations, Internally Generated Revenue (IGR), balance in the Reserve Fund and other sundry sums left in the State’s various accounts with the banks by 29th May.

The statement reads: “The aforementioned sum is exclusive of the earlier N30 billion obtained from banks by the governor since he assumed office. In sum total, about N130 billion has passed through the hands of the governor in 3 months with only a few projects of his predecessor he is completing and some cosmetic asphalting and pothole filling of some streets to show for it.

If he borrows additional N10 billion from Zenith Bank as he has already decided to do, Rivers people and our next generation shall have been enslaved further to the tune of N40 billion as loan before the tribunal shows the governor the way out of Government House, Port Harcourt.

“Indeed, the APC is saddened at the carte blanche Nyesom Wike has handed to himself to recklessly borrow in the name of the people without consideration for the present and future generations of Rivers people.

“With the Governor as Commissioner for Works, Due Process Office and Site Engineer all rolled into one, the world can better imagine the big scam going on in Rivers State by a master underhand deal-maker as Governor.

“But most worrisome to the APC is the fact that information available to us indicates that the Governor made up his mind to borrow the N10 billion from Zenith Bank which he will keep exclusively to bribe judges every step of the way especially now that news coming to the Governor from the tribunals sitting in Abuja is not that cheery to his ears.

“We recall that his earlier attempt to approach the Chief Justice of Nigeria [CJN] with a view to compromising the latter ended in fiasco as the APC exposed his antics before he could get close to the revered CJN.

“After that unpalatable incident, we believed [though wrongly] that his disastrous experience with the CJN would have taught him a lesson but from what we now know, Nyesom Wike has learnt nothing from the CJN debacle as he has since devised other means of compromising some of the men of the hallowed realm. Our happiness is that some of the judges place premium on their reputation and name and care little about the filthy lucre the Governor dangles at them.

“The APC will not forget that Nyesom Wike prides in his ability to compromise any living being as long as the person has a price. He boasts of his escapades with men of the judiciary; cavorts with court registrars, clerks and even bailiffs. We are sure he believes that he is the best at his game the way late Pablo Escobar saw himself in exaggerated terms in Colombia as a drug warlord. But there is always one mountain too high to climb for mortal man.

“Therefore, the APC would like to appeal to well-meaning Rivers elders and leaders-of-thought to prevail on Gov. Nyesom Wike against incessant and needless high-interest borrowing he has embarked on for his selfish desires as this has catastrophic outcome for the future of our people and generations yet unborn”.