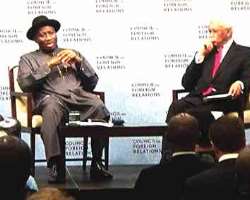 Acting President Goodluck Jonathan (left) with a former United States Ambassador to Nigeria, Mr. Howard Jetter, at a breakfast meeting at the Council of Foreign Relations in Washinton D.C… on Monday

THE United States President Barack Obama on Monday advised Acting President Goodluck Jonathan to make 'tangible progress' during his tenure by fighting corruption and rigging during elections in Nigeria.

The US President spoke when he met for 15 minutes with Jonathan at Blair House, Washington DC. The Acting President is in Washington for a two-day Nuclear Security Summit

' The President (Obama) urged Acting President Jonathan to use his tenure to make historic and tangible progress in strengthening the Nigerian government's commitment to follow through on countering corruption,' a statement on Monday by the White House said.

The statement, which was issued after the meeting, added that Obama assured Jonathan of Washington's support ' in realising his public promise for electoral reform.'

He acknowledged Nigeria's leadership role in Africa, saying the country is critical to the survival of the continent.

'Nigeria is critical to the rest of the continent and if Nigeria does not get it right, Africa will really not make more progress,' Obama added.

He also stated that 'a strong, democratic, prosperous Nigeria is in the US' national interest.

Obama, according to the statement, said that Washington 'would like to work with Nigeria to ensure a politically stable environment which will make Nigeria a good example to other African countries.''

'The President reiterated that the US places great importance on the US relationship with Nigeria and the Nigerian people.'

The statement said the two leaders also discussed the importance of combating terrorism.

It did not specify whether they talked about an attempt to blow up a US jet bound for Detroit on Christmas Day by a Nigerian, Umar Abdulmutallab.

The failed attack resulted in Washington placing Nigeria on its aviation security blacklist.

Jonathan last week had met the father of the accused, Alhaji Umar Mutallab.

The Acting President had earlier given the assurance that the Federal Government would intensify its reform programmes to strengthen Nigeria's democracy and public well-being.

He reiterated his government's commitments to making significant changes in the electoral process and social reforms.

According to him, the reform as well as transparent elections, are critical to building a solid democracy in Nigeria.

Jonathan also pledged Nigeria's commitment to a successful implementation of the recently signed Bi-National Agreement between Nigeria and the US.

He expressed optimism that the working group established by the commission would contribute towards actualising the objectives of Nigeria's Vision 2020.

The Acting President thanked the US for the support it had given for the implementation of the amnesty programme, stating that Nigeria was committed to restoring peace in the Niger Delta.

While stating Nigeria's commitment to the fight against corruption, he pledged support for a nuclear-free world, emphasising Nigeria's opposition to nuclear proliferation.

The Acting President congratulated Obama for the success of the healthcare bill in the US.

Nigerian Ambassador to the US, Prof. Adebowale Adefuye, who also spoke after the meeting, observed that the Obama-Jonathan interaction 'reflected the growing amity between Nigeria and the US.'

Washington had soon after Adefuye presented his letters of credence to Obama removed Nigeria from the list of countries whose citizens had to be specially screened at US airports. The enhanced screening was due to Abdulmutallab's action.

The following week, Washington proceeded to sign the binational commission deal with Nigeria, the first of its kind under the Obama administration.

Apart from Adefuye, the other Nigerian officials at the meeting were the Minister of Foreign Affairs, Mr. Odein Ajumogobia (SAN); and the Permanent Secretary, Mr. Martins Uhomoidhi.

From the US were the Secretary of State, Mrs. Hilary Clinton; Senior Adviser to the President on Africa, Michelle Gavin, and the US Ambassador to Nigeria, Ms. Robin Sanders.

Meanwhile, Jonathan has promised that there would be 'lots of changes' in the Independent National Electoral Commission 'between now and the 2011 general elections.'

The Acting President who spoke with a panel of experts at the Council on Foreign Relations think-tank in Washington, said there would be a 'review of individual member of INEC with a view to injecting 'new blood' into the commission where necessary.

'The ones (INEC officials) who we feel are not good enough to be reappointed, we will not reappoint, and we'll inject fresh blood,' the Agence France Presse quoted him as saying.

But he then seemed to dash the hopes of those clamouring for the removal of the Chairman of INEC, Prof. Maurice Iwu, when he told the panel that he was 'convinced that INEC and its chairman can conduct elections in Nigeria (that are) free and fair.'

Jonathan, however, warned that his government would tolerate no 'wrongdoing' in elections next year.

He said he had ' given clear directives to the INEC that we will not accommodate any wrongdoing' during the general elections.