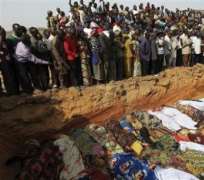 A Nigerian Anglican archbishop told 825 mostly Anglicans and Episcopalians that included 20 bishops and three archbishops that the outbreaks of violence in Northern Nigeria is a result of tens of thousands of Islamists becoming Christians resulting in the formation of 49 new dioceses.

The Rt. Rev. Edmund Akanya, Archbishop of Kaduna and Bishop of Kebbi from the Anglican Province of Nigeria told conferees at the New Wineskins conference for Global Missions that outreach to Muslims in Nigeria with the gospel is "second nature" to Nigerian Anglicans and that Anglicans "face this challenge every day."

"After experiencing Jesus Christ as Lord and Savior I went into mission. Up to 20 years ago we were dependent on missionaries. Now we have a thriving church with our own missionaries reaching out to Muslims, animists and pagans," he told the missions-minded audience many of whom had come from half way around the globe to plan mission strategies to reach the world for Jesus Christ.

Under the banner, New Wineskins for Global Mission 2010, the archbishop said news media stories only tell the ugly side of Nigerian violence, but it is not the whole story. "We are reaching out with the gospel to Muslims and those who practice African religions and creating missionary dioceses in the northern part of the country dominated by Islam. Islam came into Nigeria in the 11th century and today they have a political stronghold. We have started missionary dioceses. It has been geographically unreached. We already have 49 dioceses in the north of Nigeria in four provinces. We started with 10 and it has grown as we have evangelized planting churches among Muslims."

"How have we done this when you have a great crisis," he cried. "The crisis is happening because of the Spirit of God moving in the land. It is a work of God. We are seeing revival...God is taking over the north for Jesus Christ. People are being turned over from Islam to Christianity. Twenty years ago 5-7% of the population was Christians, now 30% of of the people in northern Nigeria are Christians."

Asked what and where the secret of this evangelistic effort came from, Akanya said, "We pray and fast. We spend time on our knees. God gives us the methods in the power of the Holy Spirit. We leave the results to Him."

The archbishop said he introduced the Jesus film into the area and along with it the Great Commission movement. "We have converted the film into local languages."

The archbishop admitted that things don't go easily "There is some risk to our lives. Sometimes our missionaries are stoned others are arrested by local police and their materials destroyed but the lord promises to be with us."

"God himself through the prayers of the church is bringing Muslims and animists out of darkness into the light of the lord. God is looking for people who are available to bring His Word to lost people. Many are coming to Christ in the north. We have gone from three to 30 to 50 churches. God is opening the hearts of men."

Akanya said one method of evangelism is building bridges of friendship. "Despite attacks and killings we keep building friendships and extending the love of Christ. We carry on despite the enmity. Poverty levels are high in the north. There is no single missionary school in the north so the challenge is to build new schools. We ourselves were educated by missionary built schools, so we know their value."

Akanya described the evangelistic outreach in First Century terms. "People are coming back from the dead. Demons and powers and principalities are being downtrodden and the Kingdom of darkness is on the ropes. You see the uprising by Muslims is because they are losing out in the North.

The city of Jos, which is closer to the the center of the country, is the headquarters of every Christian organization. It is the launching pad to the north and that is why militant Muslims are attacking Christians in Jos, he said.

(Over 300 Christian families fled in fear from the city. Jos, the capital of Plateau State in Nigeria, has seen three horrific incidents of large-scale anti-Christian violence in January and March, in which hundreds of people have died. Inaccurate international reporting of the first outbreak unfairly cast Christians as the aggressors, and they suffered savage "retaliation" at the hands of armed Muslim mobs.)

"We (Nigerians) are going to sweep throughout Africa starting with Nigeria. For every 10 people who are converted in one population group we can reach out to Africa, Asia and to the entire world. Nigeria is sending send out missionaries to other parts of Africa and we need your cooperation in reaching Francophone countries. There are still so many unreached tribes and people that are waiting to hear the Good News. Who will come and help us?

The African archbishops said Nigeria is experienced in presenting a very holistic gospel. We go into areas where HIV-AIDS is prevalent. The Mothers Union comes in to help with medical care and classes for young mothers with children. We are also digging wells and providing literacy classes, all of it designed to leading people to the knowledge of Jesus Christ.

"We will saturate the north with Jesus Christ. We will rebuild schools taken over by the Government and we are introducing the 1-1-1-1 program of one person a year who leads one other person to the lord.".