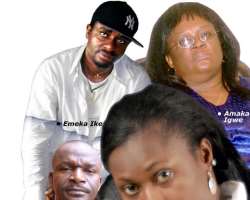 Tomorrow, Saturday, April 10, 2010; the world will stand still as the sixth edition of the annual African Movie Academy Awards (AMAA), holds amid glitz and glory, in Yenogoa, the capital of Bayelsa State.

Meanwhile, as the biggest and most glamourous gathering of film and movie people is poised to hold tomorrow, the major sponsor, United Bank for Africa has assured all stakeholders in the film industry and delegates from different parts of the world that all security arrangements to ensure a successful event have been put in place.

Speaking on the elaborate security plans, Mr. Nathan Egba, Chairman of the Local Organizing Committee and Director General in charge of Tourism in the oil rich State, disclosed that all the security agencies in the State had been mobilized and necessary logistics put in place.
Egba noted that Bayelsans in general are peaceful people and always good hosts of AMAA, adding that the citizens of the State are already in a celebratory mood to welcome their movie stars across the continent and beyond.

“It must be stressed that in the past five editions of AMAA in the State, there has never been any security breach. Beyond all security arrangements for this event, Bayelsans are good and hospitable people. They see AMAA as their event and they are ready to once again show to the rest of the world that our State is a good place to visit,” he said.

In a related development, the Director of Communications UBA, Mr. Martins Anyanwu explained the readiness of their bank as the major corporate sponsor to work with the State government and the award organizers to stage a good show. He posited that UBA is ready to showcase its excellent tradition of professionalism in everything it is involved with to the rest of Africa.

“We are proud to say our bank is a proudly African brand with presence in major economic power centres of the continent. As a major corporate sponsor of AMAA, we are ready to make film makers and other top celebrities across Africa and the Diaspora to experience the joy of coming to Nigeria and Bayelsa in particular. UBA will remain a pillar of support to the entertainment and culture industries in Africa,” Anyanwu concluded.

It would be recalled that Bayelsa State recently approached Shell Petroleum Development Company and the Niger Delta Development Commission to support the hosting of the sixth edition of the African Movie Academy Awards, as part of the moves to host the biggest entertainment awards on the continent