A SICK GIRL IN THE HANDS OF A BENEVOLENT ANGEL 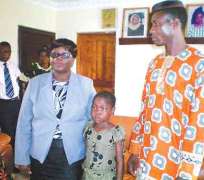 Tenabe, Feyikemi and her father, Olowodugba during the sick girl's thank-you visit to the commissioner…on Wednesday.

Nine-year-old Feyikemi Olowodugba is a quiet girl. Despite her poor background, she was doing well in her school, Adesanye Primary School, Akure, up until 2005 when the unexpected happened.

The Primary Three pupil, who lost her mother in 2002 when she was barely a year old, suddenly developed a strange illness. Her body, especially her face and tummy, became swollen.

Her carpenter father, Mr. Segun Olowodugba, and some family members moved her from one spiritual home to the other, in search of healing but to no avail.

At a stage, her education had to stop because of her deteriorating health condition.

Based on the advice of some close friends, Olowodugba, an indigene of Ilu Titun, again took the girl to the General Hospital, Akure.

After about three visits to the hospital and having spent all his money on the ailing girl, the patient was referred to the Obafemi Awolowo University Teaching Hospital, Ile-Ife, Osun State, for further medical attention.

At Ile Ife, doctors promised to help the family provided the father could pay huge medical bill, which he did not have.

It was when the girl's health further deteriorated that the distraught father, armed with a photograph of the sick girl and a Save-Our-Soul letter, went to the Governor's Office, Alagbaka, Akure in October 2009 to seek financial assistance.

Olowodugba told journalists on Wednesday that it was from the office that he was directed to the state Ministry of Women Affairs and Social Development.

Fortunately for him, he met the commissioner in charge of the ministry, Mrs. Bukola Tenabe, who, after expressing shock at the girl's ill-health, decided to help her.

'Mummy (the commissioner) wrote a letter for us to take to Ile Ife asking for how much it would cost us to treat my daughter. I brought the bill to her and she gave us money. The girl was treated and she has now been discharged. I am so happy. I am grateful to God, to the ministry and to our mummy,' the elated father said.

In a letter signed by Dr. O. Adefehinti for the Consultant Paediatric Nephrology and Hypertension Unit of the hospital dated February 25, 2009, the hospital stated that in order to sustain the present good status of health recorded in the child, she needed to be followed-up in the clinic. The hospital added that the girl would also need to be on certain drugs for at least one or two years.

Adefehinti put the cost of the drugs for the period at N90,000.

It was a happy Olowodugba, accompanied by his now radiant-looking daughter that paid a thank-you visit to the ministry on Wednesday.

He was armed, this time, with an appreciation letter from the Ilu Titun Development Union, Akure branch.

The union, in the letter signed by its General Secretary, Mr. Ebiwonjumi Sola and dated March 10, 2010, thanked the commissioner for putting a smile on the face of one of their members, Olowodugba.

Speaking to journalists during the thank-you visit, the commissioner said that she was happy that the ministry and by extension, the state government, was impacting the lives of the indigenes and residents of the state.

She said that so far, the ministry had expended about N220,000 on Feyikemi's treatment.

She added that the family would still need some money for drugs as well as for quality food for the girl while she recuperates.

She said, 'In this ministry, we neither build bridges nor construct roads. Rather, we build lives. Those who are in one problem or the other besiege this place daily and we attend to them.

'We attended to Feyikemi in the provision we make for emergency cases.

'We also take the mentally-retarded people off the streets and take them to hospitals.

'We also have programmes for widows through which we empower them to ensure that they don't become liability to the society. We distributed about 100 grinding machines to some widows recently.

'The ministry also has programmes for the vulnerable children. We also empower the physically-challenged persons.'