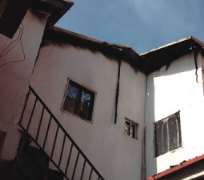 Six people died when a storey building in which they were living caught fire in Jos, Plateau State in the early hours of Saturday.

The fire was said to have started around 2 am immediately after electricity was restored from the public electric supply.

There was suspicion that the victims died of suffocation as they could not escape from the raging inferno.

The victims were given mass burial at the Zaria Road cemetery at about 12 noon on Saturday.

Our correspondent gathered the fire started from an electric surge and was aided by a gas cylinder, which exploded after the inferno began.

The man of the house, Ahmed, was said to have left his family at about 4 pm on Friday for a short trip to their home town of Lafia in Nasarawa State. However he was recalled by his landlord, Umar Dauda, immediately the incident occurred.

A distraught Ahmed rushed back to Jos oblivious of the fate that had befallen his family.

One of the witnesses, Yusuf, who shared a flat near that of the deceased, told our correspondent that he was alerted by the loud explosion of the gas cylinder. He said immediately the explosion occurred the electricity in his own apartment went off.

Yusuf said that the prompt intervention of men of the Plateau State fire service prevented the fire from spreading to other buildings.

He added, 'I was told that the victims shouted for help, but nobody came to alert us until the sound of the explosion.'

Sobbing Ahmed who spoke at the burial site at the Zaria Road cemetery said, 'I was playing with them till 4 am yesterday (Friday) before I left for Lafia. Now I have lost everything.'