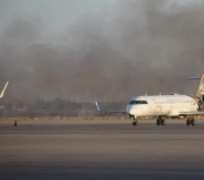 The traffic controllers at the domestic wing of the Murtala Mohammed International Airport in Lagos have suspended the industrial action they embarked upon on Thursday morning.

This followed the intervention of the Nigerian Airspace Management Agency (NAMA) which made contingency arrangements to return airplanes into the sky.

The air traffic controllers who have made a series of demands for better pay and improved working conditions however insisted that they would embark on a full-scale strike on Friday if their demands were not met.

The spokesperson of NAMA, Mrs Jumoke Adetona gave the assurance that efforts were being made to address the issues raised by the workers.