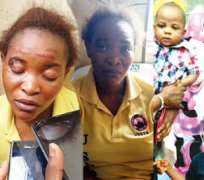 The nanny, who kidnapped three children in the Surulere area of Lagos State, has said her husband, Waheed Kareem, is the mastermind of the kidnap.

She added that Kareem was the head of a kidnap ring that involved some members of his family. It was gathered that Kareem escaped arrest.

The nanny, who adopted a pseudonym, Mary Akinloye, to deceive the Orekoyas, confessed that her actual name was Funmilayo Adeyemi, a 35-year-old indigene of Osun State.

PUNCH Metro had reported that the Orekoyas had posted on OLX, an online sales portal, saying they needed a nanny for their children.

The suspect was said to have contacted the family and was employed immediately.

Barely 24 hours after she was employed, the nanny abducted three children of the family - Aderomola (11 months), Adedamola (4 years) and Demola (6 years).

Our correspondent reported that N15m ransom was initially demanded from the family, which was later reduced to N13 after much appeal by the victims' mother.

PUNCH Metro reported that the family paid an undisclosed amount of money into the bank account of the kidnappers before the children were released on Tuesday.

On Thursday, the Commissioner of Police, Lagos State, Kayode Aderanti, announced that the nanny had been arrested.

She was paraded at the Lagos State Police Command Headquarters in Ikeja.

The suspect told our correspondent that it was the second time she would be abducting kids in the state.

She confessed to have been responsible for the kidnap of two kids- Rapheal and Michael - in the Magodo area of Lagos State.

Adeyemi said her husband, four children and she were formerly living in the Ajah area of Lagos State, but relocated to Shasha to evade arrest after kidnapping the Magodo boys.

Adeyemi claimed that the victims' parents paid N2m, adding that she was paid N30,000 by her husband.

She said she was contacted for maid jobs through her brother-in-law and his wife, who were always online to track posts.

On how she kidnapped the Orekoya children, she said, 'On Wednesday, their father and mother went to work. I put the little one on my back, while I held the others by the hands, telling them that I wanted to buy them something. We boarded a vehicle to Ojuelegba and from there; I took another bus to Iyana Ipaja and contacted my husband.

'I took them home, where they stayed with me in one of the rooms. I bought cereal for the 11-months-old baby; he was always fed with pap at his mother's place. I gave the others normal food. They always watch cartoon on the television; they never missed home.

'My husband told me that he wanted to collect a token from the parents, but the following day, I found out that the kidnappers demanded N15m.

'I challenged my husband for asking for such a big sum. He said I should shut up because I had already fulfilled my part and that it was time for them to do theirs. Later, I heard in the news that he had reduced it to N13m.'

The 35-year-old said she did not feel any remorse for her action until she saw the victims' mother weeping on a national television.

She said she begged her husband to release the kids.

'But my husband said he would not release the kids until he collected the money. Later, he told me they had paid the money,' she added.

She said when the police arrested her, she was at a fan repairer's workshop, adding that her husband saw them taking her away and fled.

Adeyemi said she was a victim of bad marriage, advising parents to always investigate on the kind of man their daughters intended to marry.

She appealed to the Orekoya family to forgive her of her wrongs.

She said, 'Mummy Damola, don't be offended at what I have done. This is what bad marriage did to me. I only delivered the message of my husband.'

PUNCH Metro learnt that when the police arrested the suspect, a 16-year-old girl, Henrietta Odili, was equally apprehended.

Odili, an indigene of Delta State was said to be living with an uncle in Benin, when she saw a post on OLX that the gang needed a maid.

Odili, a Senior Secondary School pupil, told our correspondent that she ran away from home to work with the group and she was overwhelmed by the love they showed her.

She said, 'I met this woman (Adeyemi) through OLX. I was searching for a job online when I saw that she needed a maid and I decided to work with her. When I got to their place in Lagos, they took my phone and said they would return it after one month. But they never did until after two months. When they returned it, they had removed my SIM card. I observed that all their things were done in secrecy.'

Asked if she saw the Orekoya kids when they were kidnapped, she said Adeyemi told her they were children of a popular artiste, Waje.

She said, 'When she brought the first two kids- Michael and Rapheal - she said they were her family members and were on holiday.

'She told me that the new boys were Waje's children and their mother asked her to take care of them. I never suspected I was living with kidnappers.

'But yesterday (Wednesday), we went to visit somebody. I just noticed she started running and I ran with her. The police caught up with us and said she was a kidnapper, and I was a suspect.'

The Commissioner of Police said the police got the suspect by tracking her telephone line.

He said, 'Upon the rescue of the kids, I gave the directive that she should be arrested. We tracked her down through her phone, using the technological tools at our disposal. We arrested her at Shasha, where the children were rescued.

'Initially she denied that she was involved in the kidnap. But eventually she opened up. We are in hot pursuit of others and we will get them soon.'

Aderanti advised parents and guardians not to be in a hurry to employ house helps without doing background checks on them.'

When our correspondent visited the residence of the Orekoyas on Lawanson Road, he met the family in a joyous mood.

The children were seen playing around the house.
On their experience, one of the children, Demola, said, 'Our aunty took us to our new house. She gave us bread, indomie and rice. They put us in a bag, like the one they put rice in, and put us inside the car.'

Their mother, Adebisi, said despite the criticism that had trailed her decision to hire a nanny on OLX, she did not think she was wrong.

She said by employing a nanny, she was also creating a job.

Their father, Leke, refused to disclose the amount paid to the kidnappers.