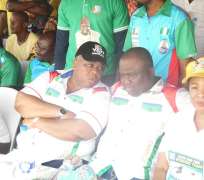 The chairman of the House of Representatives Committee on Public Accounts and the APC Senatorial Candidate for Lagos West Hon. Solomon Adeola has seriously frowned at the order of Inspector General of Police for voters to leave voting centers after voting saying it is a plot to rig the election and undermine people's determination for change.

Speaking at a town hall meeting at Agege as part of his final campaign tour of the largest senatorial district in Nigeria, Hon Adeola said that the people have to protect their vote by getting the result of the election at their various polling units before leaving adding that the 2015 elections are about the future of Nigeria and voters must ensure that their future is jealously protected against those that want to rig election.

“We are talking about our future and laying foundation for good governance. I urge you not to leave until your votes are counted and you ensure that your vote counts. Anything short of this is a ploy to rig at the polling booths and we will resist such. This election is about our future and we are ready to protect our future through this landmark election.” he stated to the joyful acclaim of those present at the event.

Hon. Adeola said the Nigerian Police force alone cannot protect the votes of the people and the people have to complement whatever unbiased protection the Police gives to ensure that vote counts adding that APC as a party are not riggers of elections and we are not asking the Police to rig for us but to help protect votes and ensure it counts.

“I am sure that no part of our Electoral law supports the IGP order as results of election must be counted and announced at the polling unit to the hearing of all.

In addition some polling units are located in densely populated areas and asking voters to leave voting center may be asking them to vacate their home or neighbourhood. It will not work and the IGP is advised to rescind the order if there

is no agenda behind it” he stated.
The APC candidate said that PDP government has failed the nation in all sectors in the last 16 years with the last six years being the worst part adding that it is time for Nigeria to vote for change and end PDP misrule.

Earlier on Professor Babatunde Samuel, an economist and a community leader in Agege said the administration of President Goodluck Jonathan has failed Nigeria with our currency almost valueless by the day and the Stock Exchange tending toward collapse adding that it is time for Nigeria to have a new lease of life by voting APC candidates at all levels.