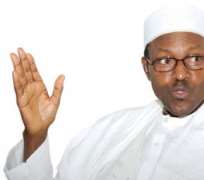 The presidential candidate of the All Progressives Congress, Maj. Gen Muhammadu Buhari (retd.), says the Independent National Electoral Commission (INEC) should not be blamed for the poll shift since it was forced to postpone the February elections.

Buhari, in a statement on Sunday, urged his supporters to remain calm so as not compound the insecurity in the nation.

Buhari said it was suspicious that after the National Security Adviser, Col. Sambo Dasuki (retd.), failed to make INEC postpone the elections based on the inability of some Nigerians to get their Permanent Voter Card, Dasuki then came up with the issue of security at the last minute.

He said, 'Following the decision by INEC to postpone the 2015 general elections by six weeks, I wish to appeal for utmost restraint and calm by all Nigerians, especially the teeming supporters of our great party, the APC.

'This postponement, which comes on the heels of the bogey of the NSA that half of the registered voters were being disenfranchised, was exposed as a crude and fraudulent attempt to subvert the electoral process.

'The PDP administration has now engineered a postponement using the threat that security will not be guaranteed across the length and breadth of Nigeria because of military engagement in some states in the North-East.

'It is important to note that although INEC acted within its constitutional powers, it is clear that it has been boxed into a situation where it has had to bow to pressure. Thus, the independence of INEC has been gravely compromised.'

The former head of state stated 'As a Nigerian and a presidential candidate in the elections, I share in the disappointment and frustration of this decision. This postponement, coming a week to the first election, has raised so many questions, many of which shall be asked in the days ahead. However, we must not allow ourselves to be tempted into taking actions that could further endanger the democratic process.”

'Our country is going through a difficult time in the hands of terrorists. Any act of violence can only complicate the security challenges in the country and provide further justification for those who would want to exploit every situation to frustrate the democratic process in the face of certain defeat at the polls.

'If anything, this postponement should strengthen our resolve and commitment to rescue our country from the current economic and social collapse from this desperate band. Our desire for change must surpass their desperation to hold on to power at all cost.'