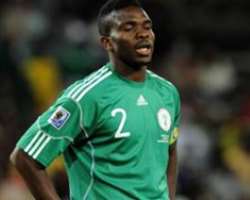 Addressing State House correspondents after a closed-door meeting with the president, Yobo said Jonathan deserved a second term to continue the 'good work' he had started.

The ex-international, who is the group's brand ambassador, said the president had done so well for the youth and called on them to re-elect him in 2015.

He stated that his organisation had a short, medium and long-term plan to partner the president on his transformation agenda.

'I'm here to endorse His Excellency, the president of our great nation, Dr Goodluck Jonathan, for his re-election. He has done so well.

'I stand here as a youth to say that he deserves a second term to push forward the good work he has started.

'I do believe in the legacy of the transformation agenda, and that's why this Ward 2 Ward Initiative is building on that legacy.

'The youth should come forward and believe in Mr President. Everybody should come out to vote for him.

'It's your choice, but as an individual and as a face of the youth, I recognise what he has done.

'The future is for the youth. We need to stand up and look into the future, not just now.

'If we don't settle down and take responsibility as youths and be able to follow what Mr President has done, then what does out future hold?'

The national Coordinator PDP Ward 2 Ward Initiative, Mr Shekulomaso Karka, said the group was a grassroots political organisation and an NGO involved in youth development at the grassroots.

Karka explained that the group was involved in the propagation of government's developmental policies and programmes in rural areas. (NAN)