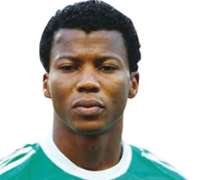 Uche will now play for the Primera DivisiÃ³n club until 2017 and he duly took to Twitter to announce the development.

'Proud to defend this shirt until 2017! Thanks to the club, fans, teammates and coaching staff VillarrealCF,' he wrote via ikeuche9.

Uche joined Villarreal from Granada in 2011, initially on loan before the deal was eventually made permanent.

He scored 14 league goals in his first full season (2012/13) with the Yellow Submarine and followed it up with another 14 last season.

The 30-year-old has already scored four goals in 13 league matches this season.