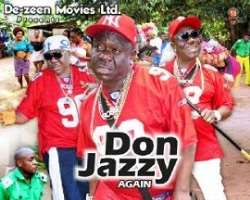 Nollywood is at again. From all indications, it seems the comic sector of the nigerian movie producers is set to release a new comedy flick which has a rather hilarious title, Don Jazzy Again.

The poster has Nollywood comic actor, John Okafor on the cover, obviously portraying Don Jazzy and wearing flamboyant clothes accompanied with a walking stick like the Mavin's boss.

Top hit songs like Kukukere, Azonto, Dorobucci, and some others have been adapted into comedy movies. More still coming up in the nearest future.