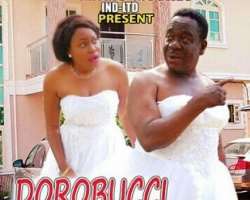 Nigeria film industry never seem to stop amazing their fans and patronizers with different kind of adaptation of musics and turning them to movies.

The had comically turned hit songs like Azonto to Azonto Babes (movie), Limpopo, and some others into comedy films.

To add to their list, the trending song produced by Mavin crew; Don Jazzy, Tiwa Savage and others, Dorobucci, has also been transformed into a Love Movie Starring John Okafor (Mr. Ibu) and Ruth Kadiri.

From Boko Haram movie to Sambisa Forest film, then the Return Of Chibok girls are now part of Nollywood movies. The talented producers are undoubtedly grabbing any given opportunity to showcase their skills to the applause and condemnation of some movie buffs.

Are these guys doing the right thing?© 2014Nollywoodgists.com