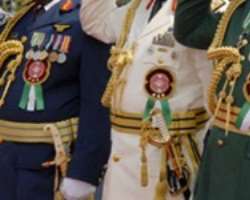 The Nigerian Senate has asked Service Chiefs to ensure that territories seized by the Boko Haram terrorist group are recaptured before the 2015 general elections.

At a meeting with the Chief of Army Staff (COAS), Lieutenant General Kenneth Minimah, on Thursday, the Senate Committee on Defence and Army expressed worries that elections may not hold in the troubled north eastern states in 2015 because of terrorist activities in the states.

The Chairman of the committee, Senator George Sekibo, said elections would hold in the three troubled north eastern states if the army recaptured all the territories seized by Boko Haram and if there was peace in the areas.

The committee invited Lieutenant General Minimah, to discuss the increasing insurgency in the north-eastern states - Adamawa, Borno and Yobe.

Briefing the Army Chief before the meeting proper, Senator Sekibo bemoaned the increasing spate of attacks in the north-east, saying; 'while politicians are busy scheming for the 2015 elections, insurgents are on the other hand having a field day, especially in the north-east'.

He informed the COAS that Nigerians were getting impatient and irritated not only with the military but also with the government and those who represent them at various levels.

Senator Sekibo said: 'I believe that we are trying our best, but is our best the best we can offer? What is happening is becoming increasingly difficult to explain to Nigerians. We want to be told what is happening. The insurgents are having a field day.

'We are aware that the government is releasing your funds to you because you have not complained. We also approved $1billion for the President to purchase arms and ammunitions to fight Boko Haram. We are aware that your budget is being released to you. If you have difficulties you should tell us.

'We want to know whether there was a dialogue, the stage of the dialogue if any because few days after the announcement of the ceasefire, the insurgents struck and have continued to strike.

'We want to know where we are. We are approaching election year. Are we going to conduct elections in the north-east under the dire security challenge? These are our concerns and the concerns of Nigerians'.

After he made the background statements, he asked Minimah to respond to the issues he highlighted and the Army Chief took a measured breath and said: 'I came to interface with the Senate Committee on Defence, can the press leave us'.

The statement changed the course of the meeting, as the Army Chief emphasised that operational matters were never discussed on the pages of the newspapers.

A member of the Committee, Senator Babafemi Ojudu, insisted that the press should be present at the meeting, as it was seen as an important stakeholder in the fight against insurgency.

But Lieutenant General Minimah insisted that the press must leave.

The discussion lasted for over two hours and briefing reporters after the meeting, the COAS told the media that the military would do its best to recapture the areas that had been seized by the Boko Haram militants.

This week, dozens of children were killed at the Government Technical Science College in Potiskum, Yobe State and just two days later, a female suicide bomber blew herself up at the Federal College of Education, Kontagora, Niger State. - Channels.