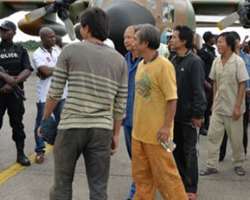 Twenty seven hostages including ten Chinese and 17 locals have been released in Cameroon, where they were kidnapped earlier this year in raids blamed on the Nigerian Islamist group Boko Haram, Cameroon’s president said Saturday.

“The 27 hostages abducted on May 16 in Waza and July 27 in Kolofata were released to the Cameroonian authorities this night,” President Paul Biya said in a statement on national radio.

The 10 Chinese citizens and other hostages, who also included the wife of Cameroon’s deputy prime minister, were all “safe and sound,” he said.

The Chinese were brought to Yaounde airport by military plane, an AFP correspondent said. As was the case in past kidnappings of foreigners blamed on Boko Haram, no details were given on how the hostages were freed.

Cameroon’s government remained vague about whether a ransom was paid.

“The head of State showed the effectiveness of the method he has always used when one of our compatriots or a foreigner living on our territory is in difficulty, particularly taken hostage by this terrorist group,” a government statement said.

“When a situation involves the physical integrity and lives of people, we don’t talk about money,” it added, without elaborating.

In June, authorities said six people had been arrested over the kidnappings of the Chinese. They were seized in May from a construction camp in Waza near the border with Nigeria in an attack that left one Cameroonian soldier dead.

The July kidnappings were carried out during two simultaneous assaults, also blamed on Boko Haram, in which at least 15 people died.

Cameroon shares a border of more than 2,000 kilometres (1,200 miles) with Nigeria, where Boko Haram has been waging a bloody insurgency since 2009.

The group did not claim responsibility for the kidnappings, but has been involved in other abductions, including of 200 schoolgirls in a case that sparked international outrage.

Boko Haram has stepped up incursions into Cameroon, prompting the government to send military reinforcements, including combat planes to the north of the country. On October 7, Cameroon, Chad, Niger, and Nigeria agreed on the deployment of 700 soldiers to target the group.

Some 10,000 people have died since Boko Haram launched its insurgency in Nigeria five years ago. Agency report