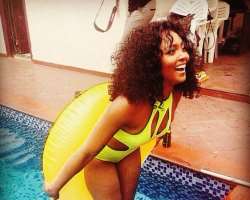 Popular Tinsel actress, Osas Ighodaro, is leaving no stone unturned as she gives a hot shot to every opportunity she gets in order to stamp her name in the entertainment industry.

The actress who currently the anchor of Nigeria's first family reality show, 'Maltina Family Dance 2014' is also a model and currently modelled a swim wear for Andre Iyama.

Osas has performed in films and television shows which include, Cadillac Records, 2011 Sundance Film Festival selected: Restless City, The Tested, and Tyler Perry's 'Meet the Browns'. Also, with thousands of entries submitted to the American Black Film Festival/NBC Universal Star Project - Monologue Competition, Osas was one of the Top three National finalists.

The actress graduated from Pennsylvania State University with a Bachelors of Arts degree in Broadcast Journalism and dual minor degrees in Entrepreneurship and Theatre. She also has Masters in Fine Arts and a degree in acting from the Actor's Studio Drama School at Pace University.