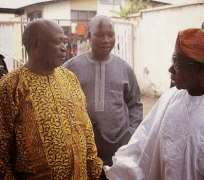 Last Friday, Former President Olusegun Obasanjo paid a condolence visit to former Oyo State governor, Senator Rashidi Ladoja, at his Ondo Street residence in Bodija, Ibadan, over the death of his mother, Alhaja Alimatu Ladoja, who was buried on Thursday.

The visit of Obasanjo was not without the usual drama for which he is known.

It was learnt that Obasanjo had already arrived (he got to the house at about 7:40 a.m.) and was in a discussion with Ladoja and the immediate past Secretary to the Government of Oyo State, Chief Olayiwola Olakojo.

On sighting the reporter, Ladoja asked how he got to know Obasanjo was around in his house, with a reply from the reporter that journalists had their news antenna all over the country and were always on the trail of newsmakers.

As soon as Obasanjo realised it was a journalist that Ladoja was talking to, he said softly: “What are you looking for here? Get out!” Ladoja intervened and pleaded with Obasanjo to allow Saturday Tribune take a photograph of the trio.

Responding, Obasanjo burst into jocular remarks and said: “You have missed a lot. If you had been here earlier, you would have seen me when I was weeping. I wept profusely and I even raised songs in honour of the deceased. So, take your photograph and we will call on you when we are done with our discussion.”

The encounter with Obasanjo went thus:
Reporter: What can you say about the deceased?
Obasanjo: (feigned weeping)….Don't you see I am crying?
What can you say about Mama's life?
Mama, Mama, Mama….she was a good mother. Rashidi (Ladoja) is now motherless.
Ladoja (cuts in): I don't have a father too, except you (embraced Obasanjo)
Obasanjo: Rashidi has now joined the club (of complete orphans).

We thank God that Mama left a worthy legacy, good children. She left what those of us who are her children can glory in. May the Almighty grant the deceased eternal rest and continue to keep the children. Mama, who left behind a good son as Rashidi Ladoja, truly has left behind a great legacy. But this great son that Mama left behind can be naughty at times. But when I scold him, he listens to me and corrects himself.

From his comment on Ladoja's mother's death, Obasanjo was asked if all was now well between him and his political godson, President Goodluck Jonathan.

This response drew laughter from around, while the former president hopped into his Jeep from where he told Ladoja he would not be available for the eight day prayer for his late mother because he would be out of the country then!

It should be recalled that Ladoja had fallen out with Obasanjo after the latter was fingered in Ladoja's impeachment as the governor of Oyo State, but with the exchange above and Obasanjo's second visit to Ladoja, the duo have apparently moved on, and have resumed their father-son relationship again.