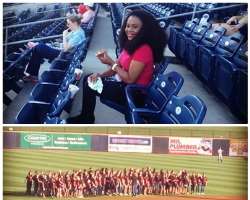 Nollywood actress, Stella Damasus, best known for her social media activism on the challenging issues facing the country, has relaxed her voice as she is now spending it with her daughters in a bid to support their careers.

Recently, the actress went to a base game which her daughter is part of to support her career in baseball which she took after her late father, Jaiye Aboderin.

Stella made this disclosure on Twitter that, “Waiting to watch my daughter perform at the baseball game ….And they were amazing!!! So proud of my little girl! God bless you babes! #Luckiest Mum in the World”.