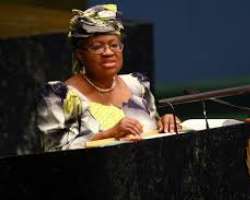 The Minister of Finance, Dr. Ngozi Okonjo-Iweala, said in Abuja that the launch of the first 10,000 mortgages was part of the Federal Government's efforts to fulfill its promise of providing affordable houses to Nigerians.

“During the launch of the Nigeria Mortgage Refinancing Company (NMRC) in January, Mr. President made the pledge to provide affordable housing by the end of the second quarter of the year.

“This is so that Nigerians will be able to apply for mortgages in large numbers; we are here to implement his vision and dream. The launch today is the actualisation of this promise to move on the road to affordable housing finance for Nigerians,'' she said.

The minister spoke at the launch event in Abuja, which signals the commencement of the Presidential Initiative on the delivery of affordable housing units to Nigerians.

She said that the launch is the kick-off of the first initial 10,000 mortgages to be provided by lenders, pointing out that NMRC would provide mortgage lending with access to more liquidity and long term funds.

The minister said the NMRC mission was to provide more liquidity for longer term funding for the housing sector.

The minister added,   “This does not make for great strength or sustainability in providing resources for the housing sector.

“The NMRC provides greater access for financing of tenures from 15 to 20 years, instead of people buying houses and paying up in either, 12, 24 or 36 months, it is changed.''

While emphasizing the need for applicants to go through prequalifying process, which she said was a critical step to home ownership, the minister said that once a person was cleared by a lender, he or she would be emboldened to buy a house within the limit of the mortgage provided.

According to her, the government tried scheme keep it low to address our first time buyers and above all our young people; essentially what we have done is to develop an online portal especially for this scheme.

She said that the mortgage would range two and N20 million.

She gave the address of the portal as www.housingfinance.gov.ng, and urged interested applicants to access the portal from Monday Aug 4.

Okonjo-Iweala said that upon completion of the form, the processing time for prequalification which used to be six to nine months had been reduced to three to six weeks.

“This will be subject to the level of risk analysis that will be undertaken by the mortgage lender,'' she added

The minister said that developers would be prequalified for building standards.

“We will be willing to work with any developer with reliable housing stalk and we can also work with developer who are just about to start construction of estates,'' she said

She said the scheme would equally accommodate beneficiaries with existing loans who might need micro loan to renovate their homes.

The Minister of Lands, Housing and Urban Development, Mrs Akon Eyakenyi, described the scheme as a milestone in the housing sector.

Eyakenyi said the programme was part of Jonathan's transformation agenda to evolve a plan for the timely delivery of affordable housing units to Nigerians.

She pledged the ministry's commitment for the commencement of the project in August.

The minister, however, appealed to states that were yet to make commitments to do so in the interest of their indigenes.

She appealed to private sector to seize the opportunity and invest in the initiative aimed at reducing the housing deficit in the country.